Try it! Interrupt the animations below to try it for yourself. Click outside to restore it.
Parinfer's "Indent Mode" rearranges parens when you change indentation:
Insert or delete a line without rearranging parens:
Comment a line without rearranging parens:
Basic Paredit without hotkeys thanks to simple paren inference. (wrap, splice, slurp, barf)
Preserve indentation when editing in "Paren Mode":

Parinfer is a proof-of-concept editor mode for Lisp programming languages. It simplifies the way we write Lisp by auto-adjusting parens when indentation changes and vice versa. The hope is to make basic Lisp-editing easier for newcomers and experts alike, while still allowing existing plugins like Paredit to satisfy the need for more advanced operations.

Read on for a full exploration of the motivations, rules, and effects of Parinfer.

Lisp is often dismissed as an undesirable programming syntax due to excessive parentheses. Those who have adopted Lisp have long recognized its amazing strengths, but there is still a widely held uncertainty among newcomers about how or even why we must manage so many parens. As a result, Lisp's unique power remains invisible to most under this guise of difficulty.

Newcomers aren't satisfied with the current tools designed for editing Lisp. Expert-level editors (Emacs, Vim) and advanced hotkeys (Paredit) are powerful but steepen the learning curve. And alternative syntaxes (Lisps without parens) have faltered since they sacrifice some of Lisp's power that seasoned users aren't willing to part with.

Parinfer is a new system that tries instead to fix this problem at its source. We formally define the relationship between Parens and Indentation. With it, we create an intuitive editor mode to make paren management fun and easy without sacrificing power. We demonstrate this through interactive proof-of-concept demos here, providing capabilities for:

Most programming languages have several syntax rules. Lisp has one: everything is a list. The first element is a function name, and the rest are its arguments. Thus, the language is simply a collection of compile- and run-time functions, trivially extensible.

But parentheses in Lisp are infamous for bunching together at the end of long expressions. This indentation convention can be jarring at first if you are used to curly braces in other languages being on their own lines:

The idea behind this convention is to make every line inform with content rather than just parens. Readability is helped by employing a Python-like indentation style. This achieves a sort of balance— Indentation allows you to skim while the parens allow you to inspect:

Though both perspectives are visible at once, we must focus on one at a time. A LEGO analogy helps here. Imagine each list in the previous example as a LEGO block stacked over its parent. Checking the sides to see the layers below is like checking the parens at the end of a line. 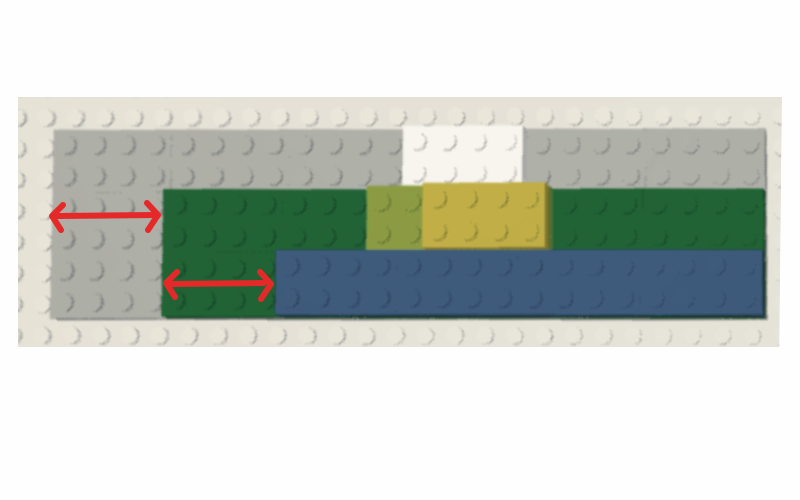 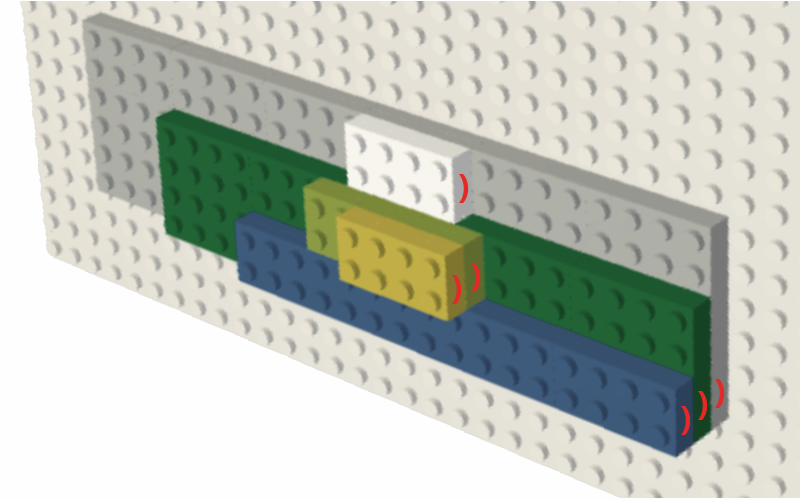 This is a physical analog to the way we read Lisp code. Now let's look at the space of tooling solutions that we use for writing Lisp code and specifically how Parinfer can help.

As we saw with the previous visualization, Parinfer will infer some changes to keep Parens and Indentation inline with one another. To keep this inference simple and predictable, we have the user explicitly choose the degree of freedom that they want full control of, while relinquishing some control of the other to Parinfer.

To make this easier, Indent Mode is default. Paren Mode can be an advanced option.

Some noteworthy unintended use-cases which we will explore later:

Feel free to skip this if you have no interest in the math that makes Parinfer possible.

The foundation of Parinfer relies on a few somewhat formalized definitions and properties:

We wish to define properties that each Parinfer mode should exhibit.

With the following definitions:

The following should be true:

The actual operations performed by the modes rely on a formal definition of what it means for Lisp code to be "correctly formatted". We establish an invariant— something that must be true for every line of code. From that, Parinfer corrects indentation or parens simply by choosing correct values for $i_n$ or $p_n$ (defined later) to satisfy this invariant:

The following is a concise reference (not a guide) to establishing this invariant that Parinfer's modes rely on.

We wish to define necessary conditions for determining if a given file of Lisp code is "correctly formatted".

We start with a clarification that we only consider non-empty lines (i.e. lines that have at least one non-whitespace, non-comment token). Thus, all following references to line number $n$ will refer to the $n$th non-empty line.

To proceed, we define the following:

Next, we define a function which determines if a line's indentation is valid:

Finally, we define that a file of Lisp code is "correctly formatted" if:

These rules are necessary and sufficient for determining when indentation is what we consider "unambiguous", but they are not sufficient in determining if code is "pretty". For example:

Formal descriptions of the actual operations performed by the modes are pending, but informal ones follow in their respective sections below.

Indent Mode gives you full control of indentation, while Parinfer corrects or inserts close-parens where appropriate. Specifically, it only touches the groups of close-parens at the end of each line. As a visual cue, we slightly dim these parens to signify their inferred nature.

Try it! Interrupt the animations below to try it for yourself. Click outside to restore it.
Indent to influence the structure of your code:
Indent further to reach different thresholds:
Indent multiple lines to see its effect:

You can select multiple lines and adjust their indentation the standard way using the controls below. If you are familiar with Paredit, these operations are roughly equivalent to those listed.

We perform the following steps to rearrange close-parens based on indentation.
We will refer to these later as rules #1, #2, #3 and #4.

This is the gist of what's happening. There are more steps performed, but we will just explore their effects in the next section.

You should be aware that the steps in the previous section have a side effect on what you type. Interestingly, these effects translate into four of the main Paredit operations.

We illustrate these operations in the following examples.

As a courtesy, Indent Mode will not move your parens until you are done typing in front of them. Just move your cursor away when you're done. A helpful analogy might be to think of your cursor as a paperweight that keeps your parens from blowing away.

Paren displaced when your cursor moves to another line. (displaced due to indentation)
Paren not displaced since you were given the chance to block it. (paren not at end of line)

Parinfer cannot infer anything about quote positions like it can with parens. So it doesn't try to do anything special with them, other than abandon processing if imbalanced quotes are detected.

Quote insertion allows temporary paren imbalances until quote is closed:
WARNING: Always make sure quotes are balanced when inside comments!
If there is an unclosed quote before a comment, which itself contains imbalanced quotes, they will balance each other out and fool Parinfer into thinking it is okay for processing.
BAD: An unclosed string in a comment can cause corrupted strings.
GOOD: Balance the quotes in the comment to prevent the problem.

Paren Mode gives you full control of parens, while Parinfer corrects indentation. You can still adjust indentation, but you won't be able indent/dedent past certain boundaries set by parens on previous lines. As a courtesy, this mode also maintains relative indentation of child elements when their parent expressions shift.

Here are some things that cannot be done in Indent Mode:

If there are paren imbalances in Paren Mode, the code is not processed, and you are prevented from switching to Indent Mode. This safely quarantines the imbalances that could be misinterpreted in Indent Mode. Thus, Paren Mode gives you an environment to fix them, after which the code is automatically formatted and ready for Indent Mode should you choose to switch.

We must take parens literally when opening an existing file. Incidentally, Paren Mode is perfect for this job, so we preprocess existing files with it before allowing the switch to Indent Mode.

Try it! Edit the code below on the left to see how it is formatted on the right.
Input: Any existing file. Must be correctly balanced, but can be incorrectly formatted.
Output: Made ready for Parinfer by correcting indentation and moving close-parens.

Notice that this process is NOT an invasive pretty-printer. Newline characters are never added or removed. It preserves as much as it can of the original code, only moving close-parens and changing indentation.

Parinfer should remain in Paren Mode if the file cannot be processed, due to the reasons stated in the previous section.

Inferring parentheses based on indentation seems to lead to simpler editing mechanics for Lisp code. It leads to a system that keeps our code formatted well. And it allows us to use paredit-like features without hotkeys.

I think the biggest win is its potential to quell fear of managing end-of-line parens by enforcing a direct driving relationship with indentation.

The rules for what happens when inserting/deleting parens must be learned. Also, the case necessitating a "Paren Mode" comes at the cost of forcing the user to understand when and how to switch editing modes.

Also, the preprocessor step performed when opening files will cause more formatting-related changes in your commit history when collaborating with others not using Parinfer.

Regardless of how we choose to edit our Lisp code, there seems to always be a balancing act between maintaining the simplicity of how we interact with the editor and accepting some editor complexity to gain automation over these powerful but numerous parens.

Building the interactive examples for this page has allowed me to explore how well Parinfer can play this balancing act, but only in a demo environment. The real test will come once it becomes available to major editors. See editor plugins for progress.

The editor demos on this site are created in CodeMirror with hooks to apply our formatters and update cursor position. Source code for both the library and site are available on github:

Parinfer is still in early development. Several people have started integrating it into code editors at various stages of development.

Parinfer is available for some REPL environments as well: 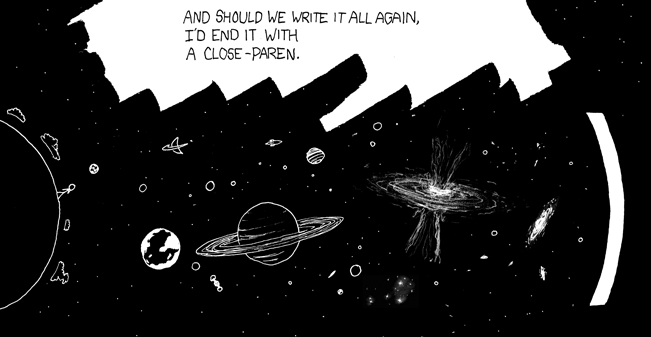