It’s hard to stop a rocket, impossible to ignore an idea whose time had come. For a species as talkative as homo sapiens, a chat app was always bound to be the killer app for smart devices.

And in 2013, it’d be easy to assume HipChat was to be for chat what Dropbox was for files. Atlassian had acquired the popular team chat app a year earlier, built new native chat apps that worked everywhere, and it was still growing fast.

From the earliest days of computers—back when green-and-black terminals were state of the art—we’ve found ways to chat. The Unix utility talk filled the gap for a while, sending messages between locally networked computers, only to be overtaken by IRC after its launch in late 1988. The late ’90’s saw chat go consumer with AOL, MSN, and Yahoo! Messenger, before Skype brought phones to chat in 2003, with voice calls, text chat, and emoticons—their early oversized emoji.

One of the first chat apps many of us used, Aol Instant Messenger led the way to today's chat apps (screenshot via TechCrunch)

So when Campfire launched in early 2006, followed by HipChat in late 2009, they built on a rich history of team chat apps—only ones that weren’t designed specifically for businesses. Instant Messaging apps and Skype let you add people to groups and chat while everyone was online, and they worked well enough we'd started using them at work, too. They weren't designed for work, but the idea of an always-on chat app was powerful enough to put up with their limitations. “Like many people, we tried to use AIM to collaborate,” wrote the HipChat team on their original About page, “but it just wasn't good enough.” 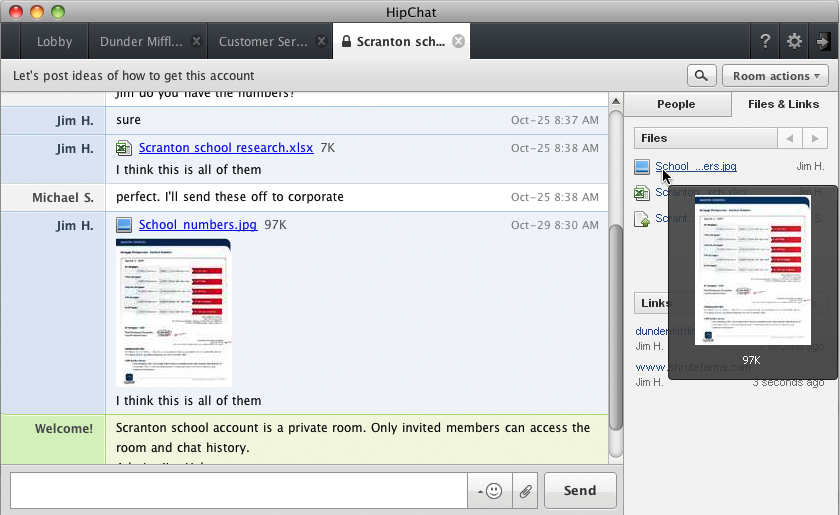 The early HipChat looked much like today's popular chat apps.

Campfire organized chat into rooms—like the more technical IRC—and let you send or scroll through chat messages anytime from its web app. HipChat then brought persistent team chat to your desktop, with apps for Windows, Mac, and Linux that let you share files, search through chat conversations across private messages and group chat rooms, mention others with Twitter-style @names, and add emoticons to lighten up the mood.

It was the perfect combination. Native apps made team chat feel as accessible as Skype or other IM apps. Emoticons and social-style mentions made it fun. Groups and search made it productive. It was easier to use than IRC, more productive than Skype. HipChat felt like the future. 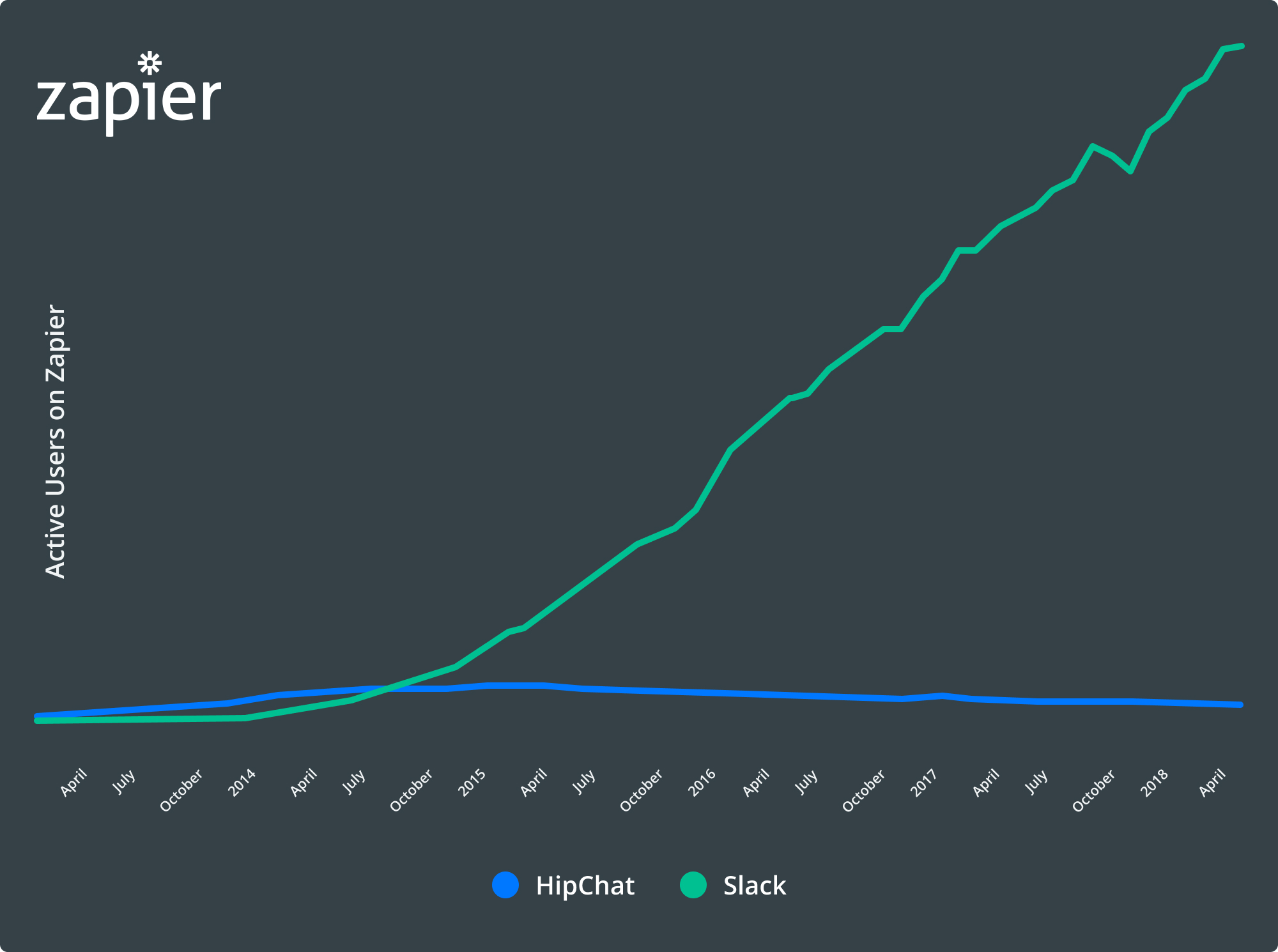 Stewart Butterfield’s team didn't set out to make a chat app. Fresh off of Yahoo’s acquisition of his team’s photo-sharing app Flickr, he started a new company to build a game. His team hadn’t set out to make Flickr, after all—that, too, started as a game before noticing the game’s photo sharing tool was more popular than the game itself.

The game didn’t work out this time either. But on the side, they built a team chat app and pivoted to it instead. Butterfield's team launched it as Slack in August 2013—and 8,000 companies signed up for Slack within 24 hours.

Slack played the HipChat game, and then some. With a bright colored theme, whimsical quotes in the loading screen, apps that felt the same on desktop and mobile, and a name that seemingly invited you to take a break, Slack aimed to make chat fun. It also made it more productive, with deep integrations to Dropbox, Twitter, Zendesk, and other work apps and a focus on bots to pull notifications and app details into your chat.

Slack today has 88% of the team chat market on Zapier.

It also made chat highly accessible. HipChat had launched a free plan for five users earlier that year—but Slack was free for everyone with limited search history (something HipChat would match a year later). You didn’t need to wait for approval from your IT department; anyone could sign up for Slack and spread it virally around the company.

Spread it did. Where HipChat had gotten businesses chatting, Slack got everyone chatting. The free version was Slack’s trojan horse. Whether you ran a small team in a corporation, launched a startup, or just wanted to organize your local sports team more effectively, Slack worked for everything.

It’s not exactly that HipChat lost the market—not at first anyhow. With deep integrations with Atlassian’s JIRA, Confluence, and other enterprise tools, it kept a hold on the business chat market for a while. But Slack grew the market massively, making team chat a new anchor app in today’s office suites. Team chat didn’t replace email—newsletters underwent a resurgence at the same time—but it did cement its place in the workplace. And over time, businesses started switching away, leading to HipChat’s gradual decline and this week’s acquisition of HipChat and Stride by Slack.

Today, Slack’s the giant, with 88% of the team chat app market on Zapier—leaving 25 other team chat apps to divide the rest. But the other software giants aren’t sleeping. Google has Google Hangouts Team Chat (along with a half-dozen other chat apps). Microsoft has Microsoft Teams. And a fun and playful upstart is challenging the giant again: Discord.

A team chat app designed around always-on voice chat for gamers, Discord has quickly made inroads into the team chat market for business, too. It’s already the 2nd most popular team chat on Zapier, with over 3% of the market and growing faster than any other new app on Zapier this year—followed by Osaka, Japan based ChatWork, another increasingly popular chat app especially in Asia.

It could almost be the HipChat vs. Slack story all over again. Discord’s free—for both unlimited team members and message history, making it a better way to start your team chatting for free. It’s an app your team members might already be using to chat with friends in games, making it easy to switch over to using it for work. And it makes calls easier than any other chat app ever has.

"Even with Slack dominating this space, there are still apps coming out with different spins on the category," said Zapier engineer Brody Berson in our app trends report. New ideas built on previous ones are what grow and change the market.

The first mover advantage isn’t always an advantage in tech. Blackberry vs. iPhone. MySpace vs. Facebook. HipChat vs. Slack.

The winners aren’t necessarily first. Instead, they grow the market. They take an old idea, approach it from a new direction, and grow the market when suddenly the old idea fits many more use cases. Then someone else takes their concept, respins it, and opens the market a bit more.

Before long, it’s hard to imagine how apps worked before the new category leader defined the category. That’s the creative evolution that makes tech a continuously changing space.

→ Find more app data from Zapier with our mid-year Fastest Growing Apps report to learn more about this year's breakout apps—and check our 2018 Software Trends Report to find what else we've learned from the data behind 1,000+ business apps.