A new semester has started, which means it is time for a new Elixir release! This release brings quality of life improvements to the documentation, to error handling, to logger reporting, and to ExUnit, Elixir’s testing library.

We are also glad to welcome Michał Muskała to the Elixir Core team. Prior to joining the team, he was a member of the Ecto team, he has made plenty of contributions to Elixir, often to improve performance, and is a frequent to contribute to Erlang/OTP too!

Furthermore, EEP 48 introduces the ability to annotate documentation with metadata, which we have made possible to leverage from Elixir:

We have updated the ExDoc tool to start leveraging metadata in order to provide better documentation for developers. Some of the improvements include: 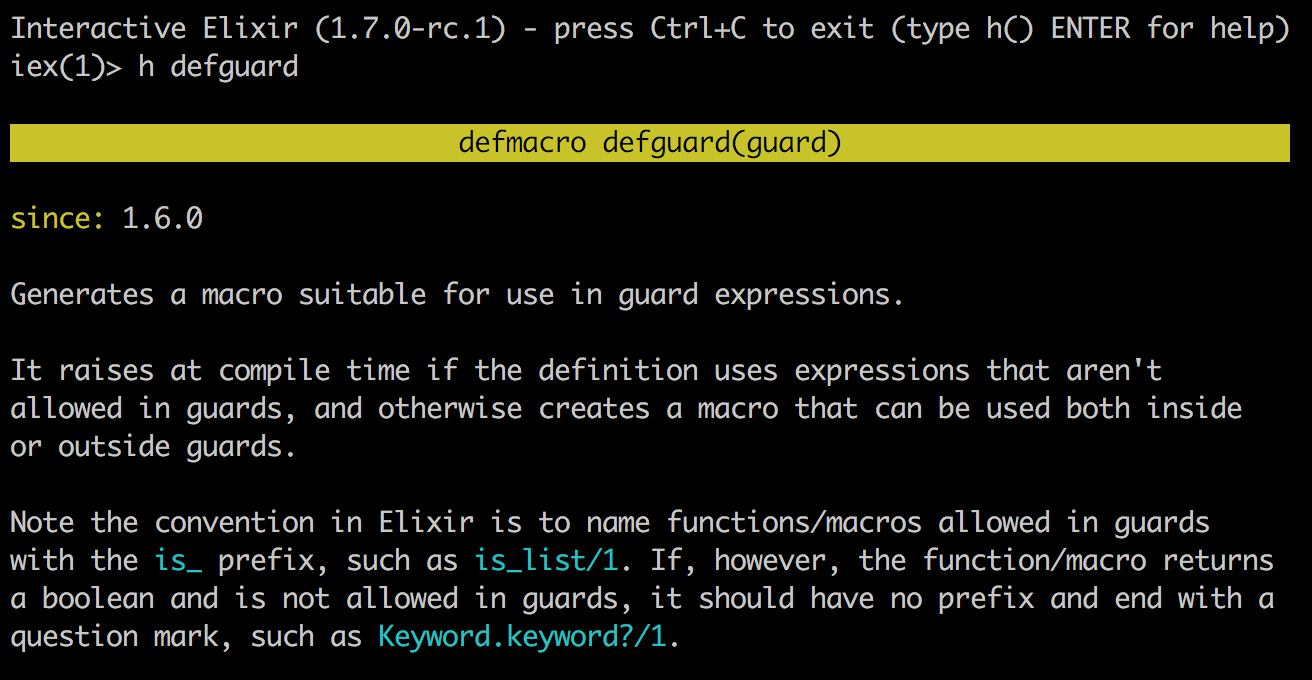 While Elixir allows any metadata to be given, those tools currently exhibit only :deprecated and :since. Other keys may be shown in the future.

Those improvements are not exclusive to the standard library, they are available to every Elixir library and application. We hope one day they will be available to all applications running on the Erlang VM too.

To access the new documentation format, developers should use Code.fetch_docs/1. We have always been proud of treating documentation as a first-class citizen and the ability to add structured information to the documentation is a further step in this direction.

Erlang/OTP 21.0 introduces a new way to retrieve the stacktrace that is lexically scoped and no longer relies on side-effects like System.stacktrace/0 does. Before one would write:

This change may also yield performance improvements in the future, since the lexical scope allows us to track precisely when a stacktrace is used and we no longer need to keep references to stacktrace entries after the try construct finishes.

Other parts of the exception system have also been improved. For example, more information is provided in certain occurrences of ArgumentError, ArithmeticError and KeyError messages.

Erlang/OTP 21 includes a new :logger module. Elixir v1.7 fully integrates with the new :logger and leverages its metadata system. The Logger.Translator mechanism has also been improved to export metadata, allowing custom Logger backends to leverage information such as:

We recommend Elixir libraries that previously hooked into Erlang’s :error_logger to hook into Logger instead, in order to support all current and future Erlang/OTP versions.

Previously, Logger macros such as debug, info, and so on would always evaluate their arguments, even when nothing would be logged. From Elixir v1.7 the arguments are only evaluated when the message is logged.

The Logger configuration system also accepts a new option called :compile_time_purge_matching that allows you to remove log calls with specific compile-time metadata. For example, to remove all logger calls from application :foo with level lower than :info, as well as remove all logger calls from Bar.foo/3, you can use the following configuration:

will fail with the following report:

The assert macro is able to look at the code, extract the current file, the line, extract the operands and show a diff between the data structures alongside the stacktrace when the assertion fails.

However, sometimes we need to write assertions such as assert some_function(expr1, var2). When such assertion fails, we usually have to re-run the tests, now debugging or printing the values of expr1 and var2. In Elixir v1.7, when a “bare” assertion fails, we will print the value of each argument individually. For a simple example such as assert some_vars(1 + 2, 3 + 4), we get this report: 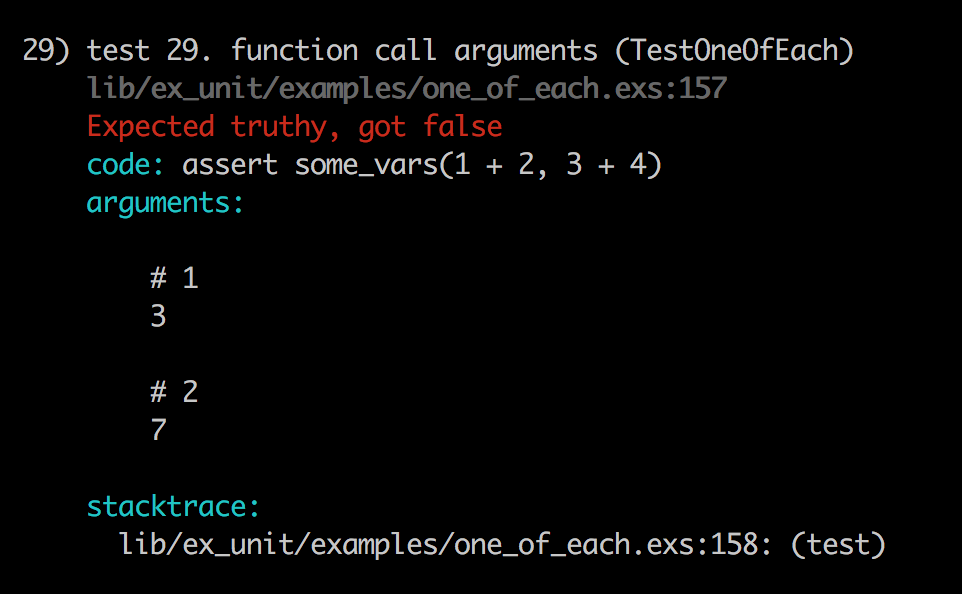 We have also added coloring and diffing to doctests.

While ExUnit is our test framework, Mix is our build tool. Developers typically run their tests by calling mix test.

On the mix test side of things, there is a new --failed flag that runs all tests that failed the last time they ran. Finally, coverage reports generated with mix test --cover include a summary out of the box:

We are really proud of this release, as it focuses mostly on quality of life improvements, instead of flashy new features. As Elixir continues to mature, expect more releases like this one. The full list of changes is available in our release notes.

We have also seen important developments in other areas not directly related to the Elixir codebase:

Finally, don’t forget ElixirConf US is coming soon, in Bellevue, WA, September 4-7. Last year my keynote focused on the last 5 years with Elixir. This year we are ready to look into the 5 years ahead.

Check the Install section to get Elixir installed and read our Getting Started guide to learn more.