Beautifully sited on the Rhône River, about fifty miles inland from the Mediterranean Sea, the town of Avignon is undoubtedly one of the most alluring locales in Provence. Underneath the towering Gothic heights of the fourteenth-century papal palace, its charming streets and squares are lined with small boutiques and cafés thrown open to the sun. Les Halles, the central food market, brims with olives, fresh herbs and spices, oysters, and an enormous variety of local cheeses, meats, and breads. In the surrounding countryside, the Côtes du Rhône wine region produces some of the finest varieties in France.

The indisputable sovereign of the southern Rhône wines is Châteauneuf-du-Pape, a strong, earthy red that was among the first French wines to receive an AOC (appellation d’origine contrôlée) after the invention of the classification scheme in the early twentieth century. Its distinctive terroir is centered around the village that bears the same name, which translates to New Castle of the Pope. It thus serves as a viticultural legacy of a brief yet pivotal era in the history of France and the Catholic Church, known forevermore as the “Avignon papacy.” It’s a tale replete with fantastic castles, poisonous plots, and antipopes—legends that have endured for far longer than the complicated politics that brought them into being.

If we return to the days of Philip the Fair, in the early 1300s, we may remember it was a newly elected French pope, Clement V, who allowed Philip to suppress the Knights Templar. Clement had been elected on the strength of his skills as a diplomat, at a time when relations between France and the papacy were severely strained. As one of his main tasks was to enact some sort of reconciliation with the French king, he decided to take up residence in Avignon. Its location on the Rhône, not far from the Mediterranean and Italian shores, made it a convenient location for traveling around Europe. A large tract of territory next to Avignon was actually owned by the papacy. And Rome was a dangerous place at that time, torn apart by power struggles among its leading families, leaving the pope extremely vulnerable. In fact, so volatile was the capital that it was not unusual then for the popes to reside outside of Rome. Clement broke new ground, however, in deciding to reside outside of Italy entirely, and in leaving a long line of popes after him in the same location. This era, in which seven consecutive French popes remained ensconced in the pleasurable idyll of Provence, is known as the Avignon papacy. 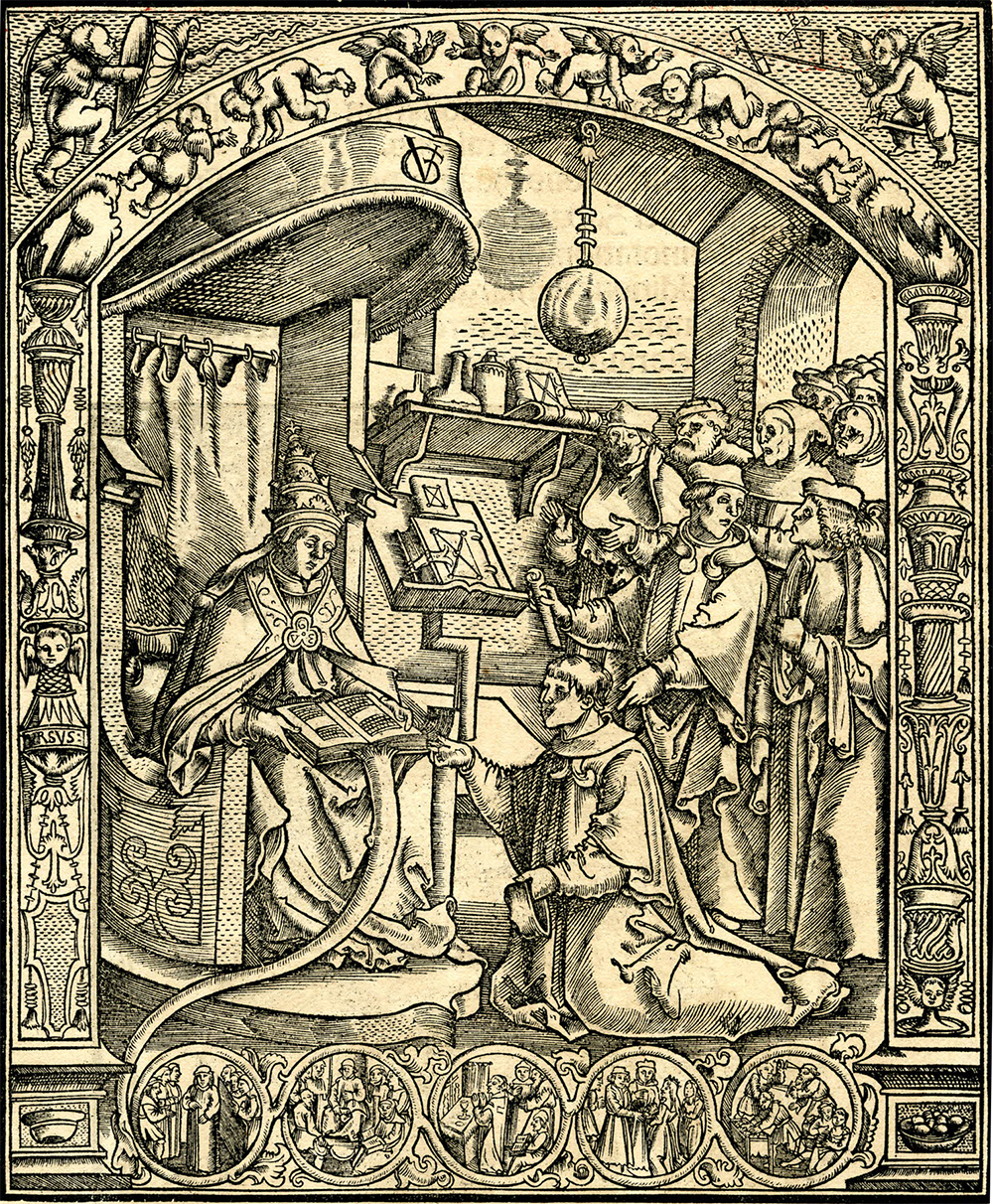 The Italians, needless to say, were not pleased by this papal abandonment. Critics referred to the Avignon papacy as the “Babylonian captivity,” arguing that the papacy had been subordinated to the French kings and the spiritual integrity of the Church had been compromised. In Dante’s Inferno, Clement V is depicted in the eighth circle of hell.

Yet this terrible sinner left a rather heavenly legacy here in the earthly realm: Château Pape Clément, produced near Bordeaux. Before becoming pope, Clement had been archbishop of Bordeaux, and there he received a vineyard in donation. He cultivated it carefully and extended its size. When he became pope, the vineyard became known as Vigne du Pape-Clément. The vineyard still has a very good reputation today, producing mainly rich and fruity wines. It can arguably claim to be one of the oldest wine-producing establishments in the Bordeaux wine region.

After Pope Clement died near Avignon in 1314, rival factions in the Sacred College of Cardinals were incapable of agreeing on a new pope. After two years, the French king essentially forced them to a vote, and they elected a frail, seventy-two-year-old French cardinal who became John XXII. Their hope was that he would have a short reign, during which each faction could strengthen its position for the next election. But their hopes were dashed, as John XXII went on to reign for eighteen years (some say his apparent ill-health had all been an act). He had previously been the bishop of Avignon and was happy to stay in place, given the continuing turmoil in Rome. His longevity was often attributed to one of his strange eating habits: he preferred to eat mainly white food products, such as milk, egg whites, white fish, chicken, and cheese. A gastronomic specialty of Avignon known as papeton d’aubergines, a sort of flan made with the (white) flesh of eggplants and originally shaped like the papal hat, is sometimes said to have originated during his reign.

The greatest gastronomic legacy of John XXII was not to be eggplants, however. In an effort to periodically escape the intrigues of Avignon, he established a summer residence in a small place now called Châteauneuf-du-Pape, in the Rhône Valley north of the city. Wine had been produced in this area since the Gallo-Roman era, and more recently by the Templars, but the vineyards had fallen into disuse. John XXII built a castle and brought in vintners from his hometown of Cahors, in southwest France, to restore the vineyards. They created a wine replete with the flavors of Provence, its complex character the result of more than a dozen varietals of grapes. Châteauneuf-du-Pape has enjoyed a stellar reputation for centuries, even surviving the anticlerical ravages of the French Revolution. The nineteenth-century Provençal poet Frederic Mistral, who won the Nobel Prize in Literature in 1904, famously referred to it as a “royal, majestic, pontifical wine.” 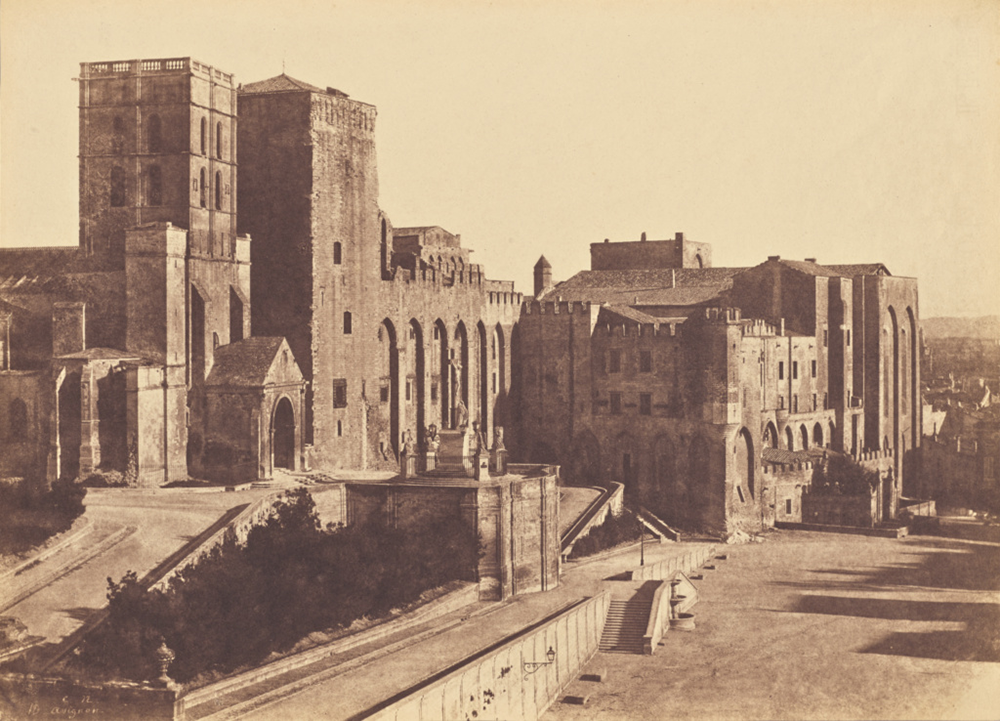 John XXII’s other obsessions reflected the anxieties of that age. He forbade the practice of alchemy and instructed the inquisitors to investigate cases of sorcery and devil worship. This association of heresy and sorcery helped set the stage for the fervent persecution of witchcraft later in the medieval era, in which thousands across Europe were tortured and killed. After a botched assassination attempt early in his reign, involving both poison and black magic, he had developed a paranoia of both. (This may, in fact, explain his preference for white foods: they would more easily reveal poison, and the holiness associated with white might offer some magical protection.) Given the fashion for poisoning one’s enemies at the time, it is not surprising that subsequent popes also developed a range of methods for detecting poisons hidden among their sumptuous feasts, from human tasters to narwhal horns to questionable mechanical contraptions.

Following John XXII’s death—in the end, from natural causes—five more popes remained in residence in Avignon. Over the years, they built up the fabulous papal residence, the largest Gothic palace in the world, which still dominates the town today. The papal court in Avignon attracted scholars and artists and became one of the most important cultural centers of the Christian world. Beautiful frescoes and tapestries lined the palace walls, and its great halls hosted extravagant feasts under a ceiling painted blue as the evening sky, studded with stars. A thousand sheep might be roasted for a single meal, accompanied by thousands of gallons of wine. In fact, it was during this time that the wines of Burgundy acquired a reputation for excellence among the French elite: little known previously due to the region’s inaccessibility to Paris, Burgundy wines were more easily transported to Avignon and thus consumed in great quantities there, along with the other great wines of the Rhône Valley. The chefs of Avignon turned the dining tables into a riot of expensive color with spices such as saffron and even gold leaf, and guests ate off plates of silver and gold. At a time when ascetic orders, such as the Franciscans, were gaining in popularity, the decadence of the Avignon court attracted as much criticism as admiration.

Accompanying this reputation for princely extravagance were accusations of nepotism and corruption, stemming from the papal practice of promoting many members of one’s family. Another enduring legacy from this era is the French phrase Il se prend pour le moutardier du pape, meaning “He behaves like the pope’s mustard maker.” It is an expression used to describe someone who, although rather stupid, thinks very highly of himself. Alexandre Dumas tells us that John XXII had a nephew too dim-witted for any responsible position, and so the pope appointed him as his grand mustard maker (John was very fond of mustard). 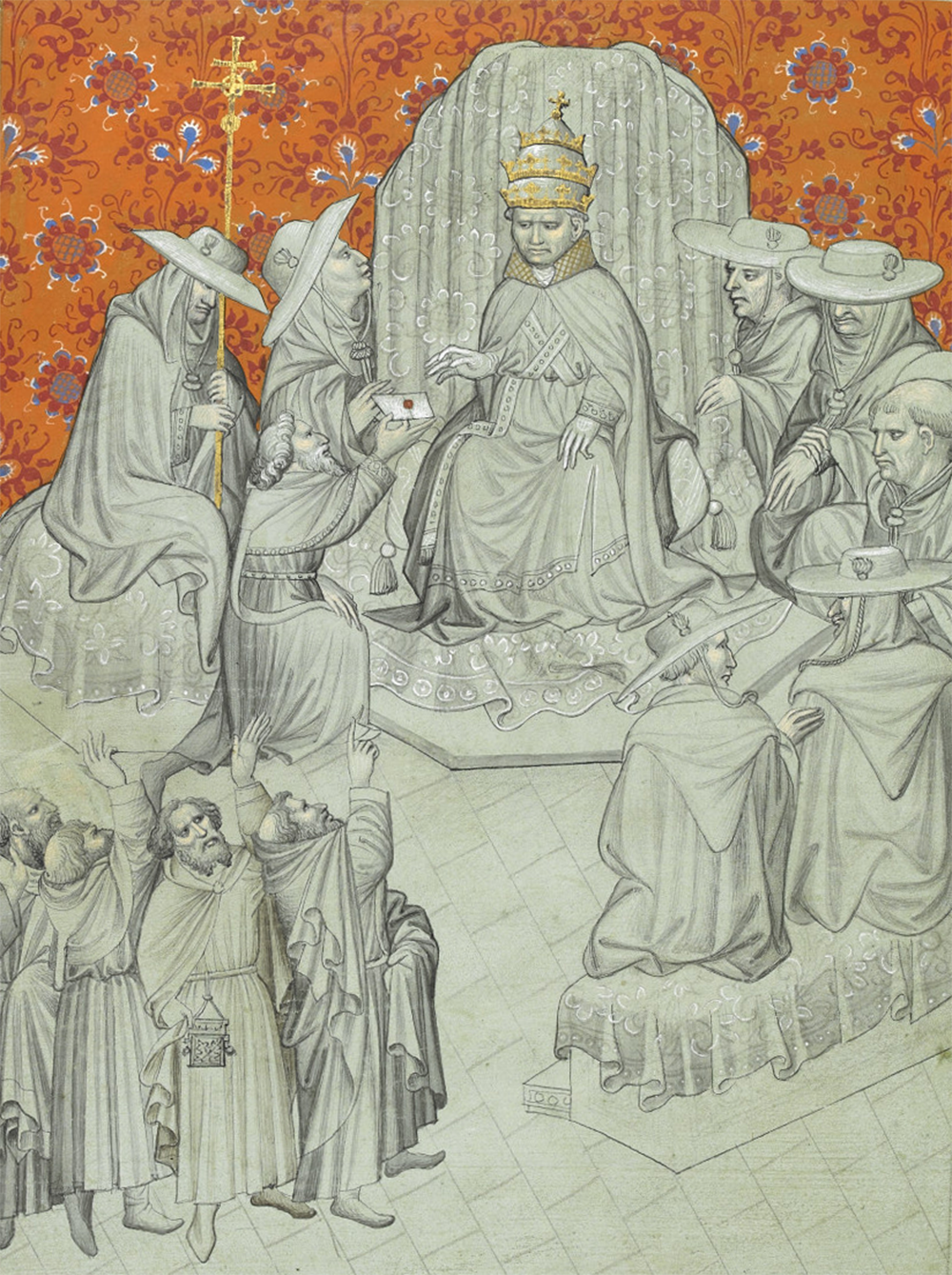 The sixth Avignon pope, Urban V, attempted to restore the papacy to Rome, but the comforts of Avignon proved too seductive, and many cardinals refused to follow him. It was left to his successor, Gregory XI, the last Avignon pope, to finally bring the papacy back to Rome in 1378. Now it was France that had become too chaotic and dangerous for the pope’s liking, as the Hundred Years’ War with England raged on, and a return to Rome would help reestablish a firm grip on papal territories and allegiances in Italy.

The Avignon era was not quite over, however. After the death of Gregory XI, the Sacred College, now back in Rome, was pressured to elect an Italian pope, Urban VI. He turned out to be very unpopular, especially among the French cardinals, who decided that his election was coerced and thus not legal. The French cardinals elected an alternative pope—or antipope—known as Clement VII, who returned to the papal residence in Avignon. He was supported by the French king and a number of other European monarchs, but many powerful states (including England and the Holy Roman Empire) supported the pope in Rome instead. For nearly forty years, rival popes in Rome and Avignon divided Christendom, a period known as the Western Schism. The papal dispute created an enormous diplomatic crisis among European states, and it occasionally leached into local military conflicts as well.

The Western Schism finally came to an end with the Council of Constance and a new consensus pope, Martin V, elected in 1417. But its effects were long-lasting: this prolonged period of intrigue and conflict fed into growing antipapal sentiments, which a century later would explode into the Protestant Reformation. The extravagance and corruption of the papal courts, and their evident concern with earthly politics rather than spiritual integrity, offered ample inspiration to philosophers and clerics calling for radical reform of the faith. The Avignon papacy, brief as it was, engendered a legacy as complex as the wines still associated with it today. While many people may only know of Châteauneuf-du-Pape as a delicious and diabolically expensive wine (and, perhaps, as a great opportunity to try out a fake French accent), it is also a surviving remnant of the titanic struggles of church and state that rent Europe seven hundred years ago. The wine that once graced the banquet tables of popes, antipopes, and kings continues to grace our humble tables today—a fairly impressive feat, given the turmoil that routinely savaged this small bit of terroir for centuries.

Copyright © 2018 Stéphane Hénaut and Jeni Mitchell. This excerpt originally appeared in A Bite-Sized History of France: Gastronomic Tales of Revolution, War, and Enlightenment, published by The New Press and reprinted here with permission.