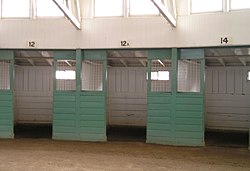 Stall numbers at Santa Anita Park progress from 12 to 12A to 14.

The term was used as early as in 1910 by Isador Coriat in Abnormal Psychology.[2]

From the 1890s, a number of English language sources relate the "unlucky" thirteen to an idea that at the Last Supper, Judas, the disciple who betrayed Jesus, was the 13th to sit at the table.[3] The Bible says nothing about the order in which the Apostles sat, but there were thirteen people at the table.

There is a myth that the earliest reference to thirteen being unlucky or evil is in the Babylonian Code of Hammurabi (circa 1780 BCE), where the thirteenth law is said to be omitted. In fact, the original Code of Hammurabi has no numeration. The translation by L. W. King (1910), edited by Richard Hooker, omitted one article:[4]

13th article: If the seller have gone to (his) fate (i. e., have died), the purchaser shall recover damages in said case fivefold from the estate of the seller.

Other translations of the Code of Hammurabi, for example the translation by Robert Francis Harper, include the 13th article.[5]

The exposed lift shaft of an apartment block under construction. The lift shaft has numbers marking the levels, but the 13th level is instead marked with a heart.

On Friday, October 13, 1307, the arrest of the Knights Templar was ordered by Philip IV of France. While the number 13 was considered unlucky, Friday the 13th was not considered unlucky at the time. The incorrect idea that their arrest was related to the phobias surrounding Friday the 13th was invented early in the 21st century and popularized by the novel The Da Vinci Code.[8]

In 1881 an influential group of New Yorkers, led by US Civil War veteran Captain William Fowler, came together to put an end to this and other superstitions. They formed a dinner cabaret club, which they called the Thirteen Club. At the first meeting, on January 13, 1881, at 8:13 p.m., thirteen people sat down to dine in Room 13 of the venue. The guests walked under a ladder to enter the room and were seated among piles of spilled salt. Many "Thirteen Clubs" sprang up all over North America over the next 45 years. Their activities were regularly reported in leading newspapers, and their numbers included five future US presidents, from Chester A. Arthur to Theodore Roosevelt. Thirteen Clubs had various imitators, but they all gradually faded due to a lack of interest.[9]

Vehicle registration plates in the Republic of Ireland are such that the first two digits represent the year of registration of the vehicle (i.e., 11 is a 2011 registered car, 12 is 2012, and so on). In 2012, there were concerns among members of the Society of the Irish Motor Industry (SIMI) that the prospect of having "13" registered vehicles might discourage motorists from buying new cars because of superstition surrounding the number thirteen, and that car sales and the motor industry (which was already failing) would suffer as a result. The government, in consultation with SIMI, introduced a system whereby 2013 registered vehicles would have their registration plates' age identifier string modified to read "131" for vehicles registered in the first six months of 2013 and "132" for those registered in the latter six months of the year.[10][11]1

An elevator in a residential apartment building in Shanghai. Floor numbers 4, 13 and 14 are missing, and there is a button for the "negative first floor".

A number of sportspeople are known for wearing the number 13 jersey and performing successfully. On November 23, 2003, the Miami Dolphins retired the number 13 for Dan Marino, who played for the Dolphins from 1983-1999. In 1966, Portugal achieved their best-ever result at the World Cup final tournaments by finishing third, thanks to a Mozambican-born striker, Eusebio, who has scored nine goals at World Cup — four of them in a 5-3 quarterfinal win over North Korea — and won the Golden Boot award as the tournament's top scorer while wearing the number 13. In the 1954 and 1974 World Cup finals, Germany's Max Morlock and Gerd Müller, respectively, played and scored in the final, wearing the number 13.[16] More recently, other top footballers are playing successfully despite wearing #13, including Michael Ballack, Alessandro Nesta, Rafinha, Thomas Müller, Tua Tagovailoa and others.[17] Among other sportspeople who have chosen 13 as squad number, are the Venezuelans Dave Concepción, Omar Vizquel, Oswaldo Guillén and Pastor Maldonado.

The disaster that occurred on Apollo 13 may have been a factor that led to a renaming that prevented a mission called STS-13[18][19]
Alternate mission patch of STS-41C, with a 13 and a black cat, as it landed on April 13th, which was a Friday the 13th and this was the mission originally scheduled as STS-13.[20]

The numbering system of the Space Shuttle was changed to a new one after STS-9.[25] The new naming scheme started with STS-41B, the previous mission was STS-9, and the thirteenth mission (what would have been STS-13) would be STS-41C.[25] The new scheme had first number stand for the U.S. fiscal year, the next number was a launch site (1 or 2), and the next was the number of the mission numbered with a letter for that period.[25] In the case of the actual 13th flight, the crew was apparently not superstitious and made a humorous mission patch that had a black cat on it.[25] Also, that mission re-entered and landed on Friday the 13th which one crew described as being "pretty cool".[25] Because of the way the designations and launch manifest work, the mission numbered STS-13 might not have actually been the 13th to launch as was common throughout the shuttle program; indeed it turned out to be the eleventh.[26][24] One of the reasons for this was when a launch had to be scrubbed, which delayed its mission.[27]

NASA said in a 2016 news article it was due to a much higher frequency of planned launches (pre-Challenger disaster).[25] As it was, the Shuttle program did have a disaster on its one-hundred and thirteenth mission going by date of launch, which was STS-107.[28] The actual mission STS-113 was successful, and had actually launched earlier due to the nature of the launch manifest.[29]

At first glance, it may seem surprising that an agency whose focus lies in science and technology should devote such an emphasis to an ancient superstition.. but for one thing: the unlucky voyage of Apollo 13.

— Tragedy and Triumph in Orbit: The Eighties and Early Nineties By Ben Evans[30]

^1 The main reason for this was stated to be to increase the number of car sales in the second half of the year. Even though 70% of new cars are bought during the first four months of the year, some consumers believe that the calendar year of registration does not accurately reflect the real age of a new car, since cars bought in January will most likely have been manufactured the previous year, while those bought later in the year will be actually made in the same year.
^2 Tuesday is generally unlucky in Greece for the fall of Byzantium Tues 29th May 1453.[36] In Spanish-speaking countries, there is a proverb: En martes no te cases, ni te embarques 'On Tuesday, do not get married or set sail'.[37] The 13th card in Tarot's major arcana is Death.