Whistle-Blower Is a C.I.A. Officer Who Was Detailed to the White House

WASHINGTON — The whistle-blower who revealed that President Trump sought foreign help for his re-election and that the White House sought to cover it up is a C.I.A. officer who was detailed to work at the White House at one point, according to three people familiar with his identity.

The man has since returned to the C.I.A., the people said. Little else is known about him. His complaint made public Thursday suggested he was an analyst by training and made clear he was steeped in details of American foreign policy toward Europe, demonstrating a sophisticated understanding of Ukrainian politics and at least some knowledge of the law.

The whistle-blower’s expertise will likely add to lawmakers’ confidence about the merits of his complaint, and tamp down allegations that he might have misunderstood what he learned about Mr. Trump. He did not listen directly to a July call between Mr. Trump and President Volodymyr Zelensky of Ukraine that is at the center of the political firestorm over the president’s mixing of diplomacy with personal political gain. 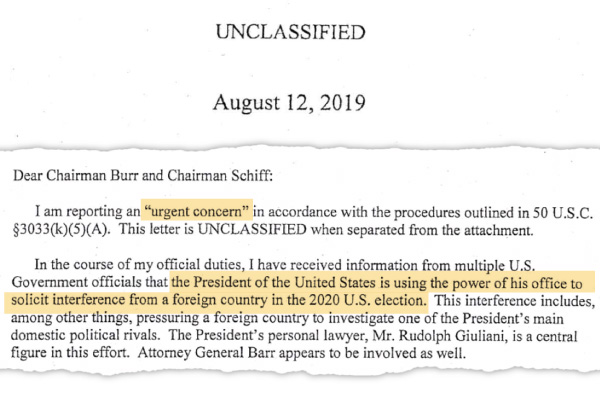 Lawyers for the whistle-blower refused to confirm that he worked for the C.I.A. and said that publishing information about him was dangerous.

“Any decision to report any perceived identifying information of the whistle-blower is deeply concerning and reckless, as it can place the individual in harm’s way,” said Andrew Bakaj, his lead counsel. “The whistle-blower has a right to anonymity.”

The C.I.A. referred questions to the inspector general for the intelligence agencies. A spokeswoman for the acting director of national intelligence, Joseph Maguire, said that protecting the whistle-blower was his office’s highest priority. “We must protect those who demonstrate the courage to report alleged wrongdoing, whether on the battlefield or in the workplace,” Mr. Maguire said at a hearing on Thursday, adding that he did not know the whistle-blower’s identity.

Dean Baquet, the executive editor of The New York Times, said The Times was right to publish information about the whistle-blower. “The role of the whistle-blower, including his credibility and his place in the government, is essential to understanding one of the most important issues facing the country — whether the president of the United States abused power and whether the White House covered it up.”

Agents, officers and analysts from the military, intelligence and law enforcement communities routinely work at the White House. Often, they work on the National Security Council or help manage secure communications, like calls between the president and foreign leaders.

The C.I.A. officer did not work on the communications team that handles calls with foreign leaders, according to the people familiar with his identity. He learned about Mr. Trump’s conduct “in the course of official interagency business,” according to the complaint, which was dotted with footnotes about machinations in Kiev and reinforced with public comments by senior Ukrainian officials.

8 Takeaways From the Whistle-Blower Complaint

Officials regularly shared information to “inform policymaking and analysis,” the complaint said. The complaint raises the prospect that the whistle-blower was not detailed to the White House either during the events in question or when he learned about them.

Mr. Trump took aim at the whistle-blower’s credibility on Thursday, attempting to dismiss his revelations because they were secondhand.

He also obliquely threatened the whistle-blower or his sources with punishment. “I want to know who’s the person who gave the whistle-blower the information because that’s close to a spy,” Mr. Trump told staff members from the United States Mission to the United Nations before an event there.

“You know what we used to do in the old days when we were smart with spies and treason, right?” he added. “We used to handle it a little differently than we do now.”

On the call with Mr. Zelensky, Mr. Trump asked him to investigate unsubstantiated allegations of corruption against former Vice President Joseph R. Biden Jr. and his son and other matters he saw as potentially beneficial to him politically.

Mr. Trump cajoled Mr. Zelensky to coordinate with Attorney General William P. Barr and the president’s personal lawyer Rudolph W. Giuliani, according to a reconstituted transcript of the call that the White House released on Wednesday. Mr. Zelensky, who was elected in April, agreed to help Mr. Trump. While Ukrainian prosecutors have moved to pursue an inquiry of an oligarch whose company paid Mr. Biden’s son Hunter, they did not allege wrongdoing by the Bidens.

The call with Mr. Zelensky was originally thought to be a routine matter, the complaint said, and the White House did not restrict it, meaning a number of officials and note takers listened.

Notes and rough transcripts of White House calls are typically stored on a computer system that allows senior officials in different departments and agencies to access them, to better coordinate policy.

Some White House colleagues told the whistle-blower that they were concerned they had witnessed “the president abuse his office for personal gain,” according to the complaint.

His complaint went beyond the call. During his time at the White House, the whistle-blower became deeply unnerved about how he believed Mr. Trump was broadly seeking to pressure the Ukrainian government to conduct investigations that could benefit him politically.

“Namely, he sought to pressure the Ukrainian leader to take actions to help the president’s 2020 re-election bid,” the complaint said of Mr. Trump.

After the call, multiple officials told the whistle-blower that future talks between Mr. Trump and Mr. Zelensky would depend on whether the Ukranians would “play ball” on the investigations he sought.

Adam Goldman reports on the F.B.I. from Washington and is a two-time Pulitzer Prize winner. @adamgoldmanNYT

Michael S. Schmidt is a Washington correspondent covering national security and federal investigations. He was part of two teams that won Pulitzer Prizes in 2018 — one for reporting on workplace sexual harassment and the other for coverage of President Trump and his campaign’s ties to Russia. @NYTMike

Julian E. Barnes is a national security reporter based in Washington, covering the intelligence agencies. Before joining The Times in 2018, he wrote about security matters for the Wall Street Journal. @julianbarnes • Facebook