A Senator’s Lake House vs. a Town Fighting Flooding

MIAMI, Okla. — On the shimmering waters of Grand Lake, a popular vacation spot in northeastern Oklahoma, families have spent the summer splashing around in boats, fishing for the lake’s famous bass and enjoying weekend getaways at upscale waterfront homes.

But drive just a few dozen miles north, and the festivity dissolves into fear over flooding in Miami (pronounced My-am-uh), a city of 13,000 where one in four people live in poverty. For years, the town has fought a losing battle against the wealthy community at the lake, where high water makes for better boating but leaves little room for overflow when it rains. With heavy rains this year, the city of Miami and local Native American tribes say they were again left to pay the price when floodwater clogged upstream, damaging their homes, businesses and ceremonial grounds. 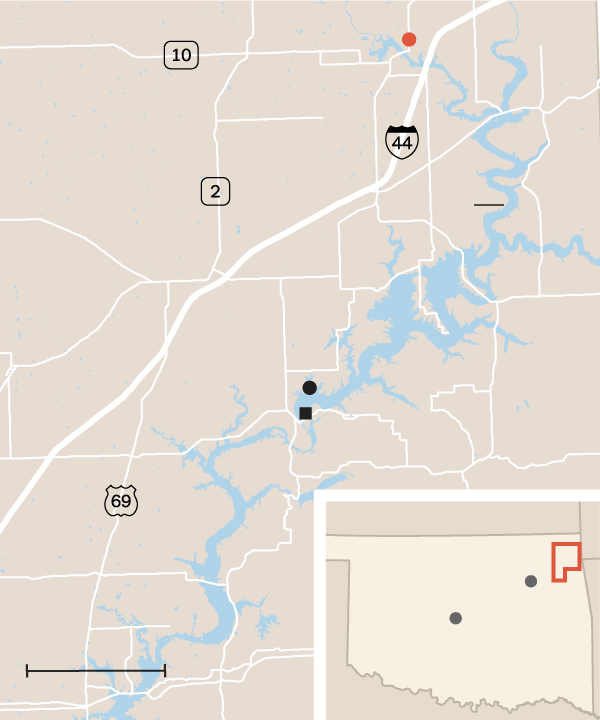 Now, this backyard battle has escalated to the halls of Congress, after one of the lake’s residents, Senator James M. Inhofe, got involved.

After decades of debate, local leaders had pinned their hopes on a rare chance to ask a federal agency to help stop the flooding. But Mr. Inhofe — a top Republican who is known to swim and fly planes around the lake, where his family owns a vacation home — quietly introduced legislation in June that would hamstring that agency.

He added the protections in an amendment to the National Defense Authorization Act, a military funding bill that is up for consideration before Congress. As chairman of the Senate Armed Services Committee, Mr. Inhofe has wide latitude over provisions included in the 1,700-page bill.

What might be considered typical power politics in Washington came as a shock in Miami, where the mayor said he only learned about the legislation after a reporter for a trade publication called to ask questions. Many in town saw the move as a sign of overreach by a powerful lawmaker. Now, a coalition of city leaders, tribal chiefs and lawyers is scrambling to oppose the proposal by Mr. Inhofe, a former mayor of Tulsa and United States representative who has held elected office in Oklahoma for decades.

Mayor Rudy Schultz, whose full-time job is running a furniture store company, said he felt like he was in a fight to save his town.

“Your amendment is a direct threat to the health and safety of thousands of your constituents,” Mr. Schultz wrote in a letter to Mr. Inhofe last month.

“The fact that you own a home on Grand Lake,” he added, “makes your involvement even more inappropriate.”

Mr. Inhofe, who has the support of many on the lake, has long argued for higher water levels to “make the lake a better place for recreation and commerce.” In a statement, he said his proposal would streamline oversight and was “just good policy.”

“Kay and I have been going to our place at Grand Lake since we built it in 1962,” Mr. Inhofe said, referring to his wife. “We know nearly everyone in the community and everywhere we go we hear about the need to maintain the lake for its primary purposes of flood control, power generation and recreation.”

Miami sits just off the interstate about 90 miles from Tulsa, in a rural corner of the state where hayfields, cattle ranches and pickup trucks dot the landscape. A billboard welcoming visitors to town features the local football hero Steve Owens, who won the Heisman Trophy in 1969. It is a small symbol of hometown pride from a bygone era, when the city bustled with middle-class families and there were plenty of jobs at a B.F. Goodrich tire plant.

Today, the county — home to nine Native American tribes, whose members make up about 20 percent of the population — mostly gets by with factory work and tribal casinos.

But local residents say that flooding has exacerbated the area’s decline.

Since the early 1990s, Miami has flooded more than two dozen times, Mr. Schultz said. About 150 houses have been torn down, and many more abandoned.

As recently as May, when storms slammed the Midwest, the water did more than just seep into homes. It swallowed up entire roads and lay like a heavy blanket over town, leaving only rooftops visible.

Nearby, the Eastern Shawnee Tribe said its ceremonial grounds flooded in three feet of water. The tribe evacuated 30 families and had to navigate dangerous roads that stayed impassable for weeks, Chief Glenna Wallace said. “We have mold everywhere,” she said. “We have insects everywhere.”

No one disputes that these communities have flooded again and again. But a debate over whether operations at the lake contribute has played out in reams of federal filings and years of lawsuits involving hundreds of residents.

At issue is whether the Pensacola Dam, which was built in 1940 and created the lake, causes a “backwater effect,” a phenomenon that can occur when free-flowing water hits a dam and piles up.

“If you keep the lake levels high,” Neil Grigg, a civil engineering professor at Colorado State University, said, speaking generally, “you don’t have as much storage space available when a flood comes, so that is going to make the flooding upstream worse.”

The city of Miami argues that it would not flood so severely if not for the dam. The nonprofit state agency that oversees the dam, the Grand River Dam Authority, disputes that a backwater effect exists and denies causing flooding upstream.

As heavy rainstorms become more common with climate change, residents fear that the threat is only getting worse.

“I was born and raised here,” said Ethel Cook, 68, chief of the Ottawa Tribe, which had to cancel lunches for tribal elders during the flooding this spring. “I’ve never seen it as bad as it was this year.”

But this year after the most recent flood, local officials saw an opportunity to rectify the crisis: The dam, which generates hydroelectric power, was due for a new license from the Federal Energy Regulatory Commission for the first time in nearly 30 years.

The officials planned to ask the commission to instruct the Grand River Dam Authority to buy up flooded land, or at least lower the lake before big storms.

Since he was elected to the Senate in 1994, Mr. Inhofe has fought for less government regulation and is well-known for denying global warming. (He once brought a snowball to the Senate floor to try to undermine the validity of climate science.)

He has also taken a keen interest in Grand Lake, where records show that about $1 million in waterfront property belongs to a company in his wife’s name.

“For the better part of my career in the United States Senate I have been working to maintain higher lake levels on Grand,” Mr. Inhofe wrote in a letter to the Federal Energy Regulatory Commission in 2016, adding that he was concerned about injuries from boat groundings and access to “coves, marinas, and docks.”

His amendment would limit the commission’s authority over lake levels and flood control. It also says that federal land “shall not be considered to be a reservation,” a move that tribes say would gut their rights.

“I will vote against him for this,” said Mike Mattingly, a 58-year-old truck driver and registered Independent in Miami, who said he spent $30,000 to repair his house after a flood in 2007 and lost Christmas decorations and power tools in the recent flood. “I don’t care if it’s a Republican, Democrat, Independent.”

But Joe Harwood, 69, who owns a yacht club and marinas, said he and other business owners on the lake were pleased. “I don’t know any that are not supportive of this,” he said.

Ross Baker, a distinguished professor of political science at Rutgers University, said that while the senator’s personal interests at the lake might make the legislation appear “slightly unsavory,” it was unlikely to amount to a serious ethical violation in the Senate. Rather, he said, “the downside for him is more in terms of political embarrassment.”

“In a state that would be politically more competitive than Oklahoma, this could be trouble for Senator Inhofe,” he said. “But Senator Inhofe is a local institution.”

In statements, Mr. Inhofe and the Grand River Dam Authority said that the legislation would clear up confusion about who was in charge of flood control and empower one federal agency — the Army Corps of Engineers — to balance water flow in the region.

The legislation is pending, and Senate and House representatives plan to negotiate a final bill in the coming weeks.

Richard Glick, a member of the Federal Energy Regulatory Commission, cautioned that there was a reason the commission regulates about 1,700 hydroelectric dams across the country.

“If you take the umpire out of the baseball games and let the pitcher call the strikes and balls,” he said, “what do you think the pitcher is going to do?”

Sarah Mervosh covers breaking news from New York. She was previously an investigative reporter at The Dallas Morning News.