Attention shoppers: I've seen the future of grocery store technology, and let me tell you, we can do better.

I’m no Marty McFly. I simply reside in a small Connecticut town, which means that in addition to doing Extremely New England things like commuting to the city on the Metro North, bragging about beaches, and the fact that the state inspired the picturesque fictional town in Gilmore Girls, I occasionally spend some time on the weekends shopping for groceries at a local Stop & Shop.

Prior to 2019, the Stop & Shop shopping experience was similar to that offered by most any other large grocery store chain. But this year, Stop & Shop introduced giant, gray, aisle-patrolling robots at more than 200 stores in Connecticut, Massachusetts, Rhode Island, and New Jersey.

SEE ALSO: Scrubbing dishes sucks. Luckily, this robot will do it for us.

Each of the robots weighs a massive 140-pounds and costs a whopping $35,000. Oddly, all of the robots are named Marty, and atop their tall frames — which tower over my own 5 foot, 3 inch stature — rests a large pair of google eyes. You know, so as not to come off as complete faceless, emotionless, lifeless bots. If you’re confused as to what these rolling mechanical columns do, Martys also wear the following description on their bodies like a name tag:

This store is monitored by Marty for your safety. Marty is an autonomous robot that uses image capturing technology to report spills, debris, and other potential hazards to store employees to improve your shopping experience.

Essentially, once Marty identifies a hazard using its sensors, it stops in its tracks, changes its signature operating lights from blue to yellow, and repeatedly announces, "Caution, hazard detected," in English and Spanish. One of several catches to their existence, however, is that the robots don't actually clean anything.

Marty does a whole lot of nothing

Marty is advertised as an aisle-sweeping superhero, but it's simply a messenger that shouts about a problem until a more capable human comes and removes whatever the hazard may be. Upon learning this fact, some people, like myself and the woman heard in this video shared by Twitter user @jennlynnjordan, are rightfully confused.

Apparently my supermarket has just gotten a robot. Its name is Marty. It detects spills. Doesn’t clean them, just starts shouting if it sees one. pic.twitter.com/xnRuV8LBCU

"Oh, I thought it washed the floor," the unimpressed mystery shopper can be heard saying. "Wow... I've got my husband to tell me there's a mess!” she continued, delivering a burn to both Marty and her semi-helpful hubby. As Jessica McKenzie reports for the New Food Economy , employees aren't the biggest fans of the machines either.

“It’s really not doing much of anything besides getting in the way,” an employee told McKenzie. And in some cases, the machines even create more work.

A January press release states that the in-store robots are supposed to "enable associates to spend more time serving and interfacing with customers," but one of the robot’s major flaws that its sensors appear to treat each hazard with the same level of caution. A harmless bottle cap or errant piece of cilantro will elicit the same response as a spill of clear liquid that someone could genuinely slip and injure themselves on, which means that in certain cases an employee may have to take time that could be spent interacting with a customer to walk across the store and grab a puny little grape that escaped a bag. Seems counterproductive!

I've only seen Marty "go off" once in the produce section. When an employee came to the rescue she couldn't seem to find the hazard, so in attempt to quiet the robot she scanned the floor and began picking up any fragment in sight — a questionable crumb, a plastic bread tag, a shred of corn husk. To this day I have no idea what minuscule object Marty was trying to warn me about, but after causing quite the scene it eventually resumed floor duty.

The feeling of shopping amidst a supermarket stalker

When Marty isn't getting all hot and bothered about an abandoned twist tie on the floor, you can find the robot beeping incessantly and lurking behind customers' backs.

Some shoppers — especially those with children — find the robots charming. Nancy Lesslie, who frequents a Stop & Shop in Quincy, Massachusetts, told the Boston Globe, "I talk to him [Marty] I take videos of him. I show them to my kids... he just makes me smile."

Others, however, find Marty's unfamiliar presence a bit unsettling.

On one shopping trip while I was browsing a shelf filled with bags of quinoa, I realized that the possibility of Marty choosing my aisle to turn down filled me with genuine anxiety. As Marty's beeps grew louder and closer I literally held my breath and prepared to speed-walk away if necessary to avoid an encounter. After seeing Marty roll past my aisle I triumphantly thought, "That's right. Keep rolling."

Remember that one debate in October 2016 when Trump was shadowing Hillary Clinton like a magnetic ghost? That's how I feel whenever Marty is around. The googly eyes soften the machine's appearance for a few seconds, but once you break off the staring contest you're reminded that you're in the presence of a rolling piece of tech that uses laser sensing and cameras.

Ultimately, these robots feel more like a burden than a benefit. They're way too large, way too beep-y, way too pricey, and they seem to create additional tedious work for employees.

You're telling me Marty has to be this huge? We're the same humans that created the Roomba, and yeah, it sometimes runs over dog poop and makes a mess, but at least it's small and capable of cleaning.

And is it really worth investing $35,000 in a mostly useless machine when Stop & Shop has reportedly cut back on staffing and made money problems clear to employees?

The robots did have one perk, though. They actually increased human interaction and led me to interact with employees and fellow shoppers more than usual. Nothing more unifying than a couple of humans chatting over shared robot confusion. As time passes and we further acquaint ourselves with Marty's presence, though, that conversation will die down.

Met this robot in Stop and Shop today

Are the eyes to make it more relatable? Distract us from the robot takeover? Comic relief??

Ironically increased human interaction in the store because everyone is talking about it pic.twitter.com/eJ6oAWQCgK

While Stop & Shop's tech innovations have made headlines recently, they aren't the only stores to test out robots. Westfield malls in California introduced Pepper, a cute 4-foot-tall humanoid robot, in 2016, and even Walmart plans to bring thousands of autonomous floor scrubbers to stores next year.

In June, Stop & Shop began bringing Marty to stores in New York, and by the end of the year, 500 of the robots will be in Stop & Shop stores and Giant food stores — another supermarket chain owned by the Netherlands-based parent company, Ahold Delhaize.

Perhaps if I wasn't so paranoid of technology and didn't live through billions of email addresses getting hacked, millions of Facebook users being impacted by security breaches, rumors that Amazon Echo devices are spying on us, and more I would be more accepting of Marty. But for now, I just want to shop for groceries in peace. 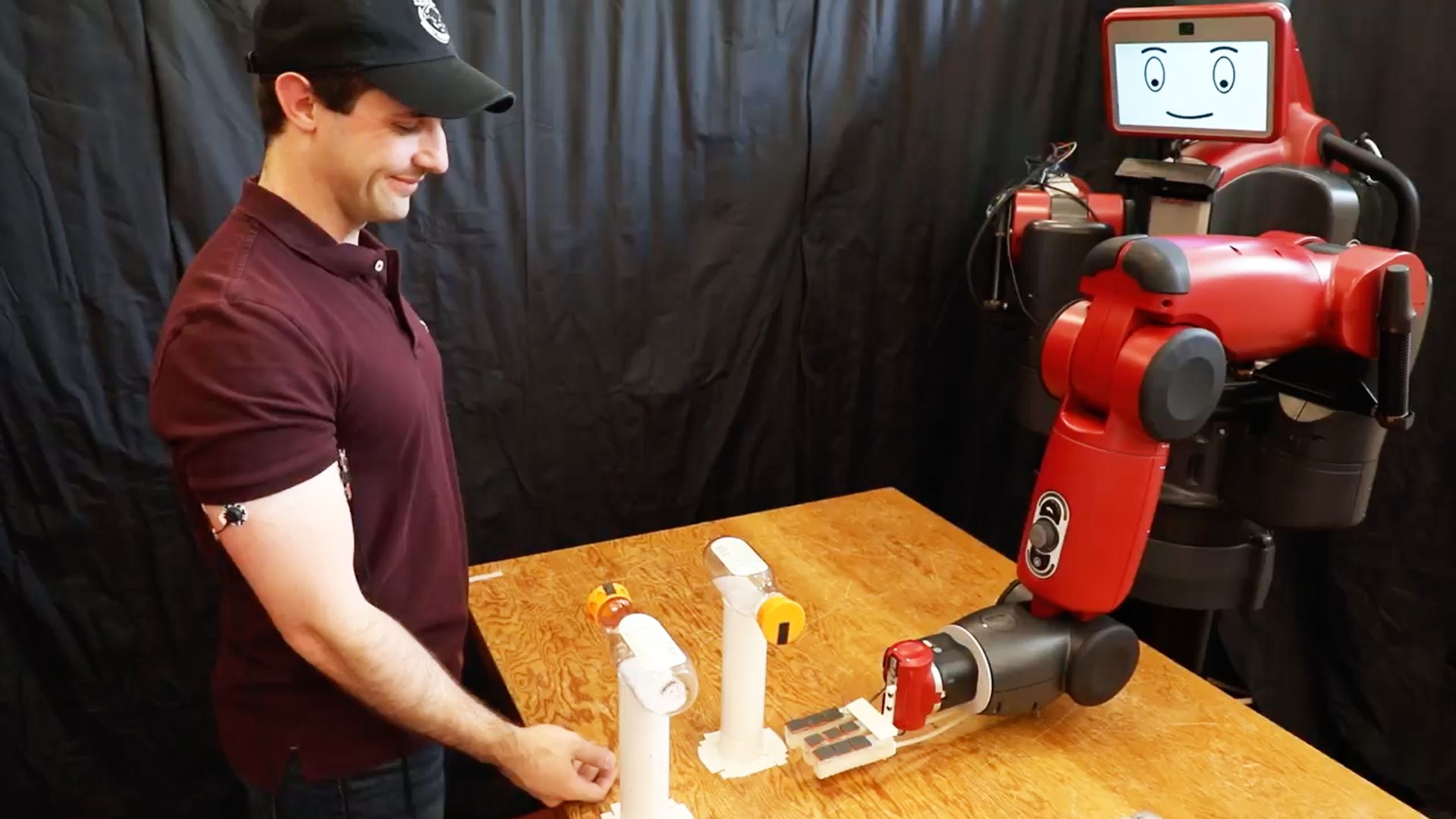