Morgan City’s motto is “Right in the Middle of Everywhere.” On Saturday morning, the Louisiana city of 12,000 people may find itself right in the middle of a hurricane.

Forecasters expect Tropical Storm Barry, now out in the Gulf of Mexico, to develop into a Category 1 hurricane and land right on the city, which has had many close calls in recent years but not a direct hit. Residents and business owners are already filling sandbags, gassing up generators and gathering food and water supplies.

“We’ve been dodging the bullet for the last 10 years,” Mayor Frank Grizzaffi said in an interview Thursday. “Every time a hurricane comes up, it’s somewhere near Morgan City. This time, I think we’re finally going to get it.”

Morgan City, about 70 miles southwest of New Orleans, is almost an island, surrounded by lakes, rivers, marshes and not much else. “We have 20 miles of coastline before the Gulf, so that buffers us a little bit,” Mr. Grizzaffi said, adding, “But what we’re concerned about is the rain.” The forecasters predict up to 18 inches by Sunday morning. 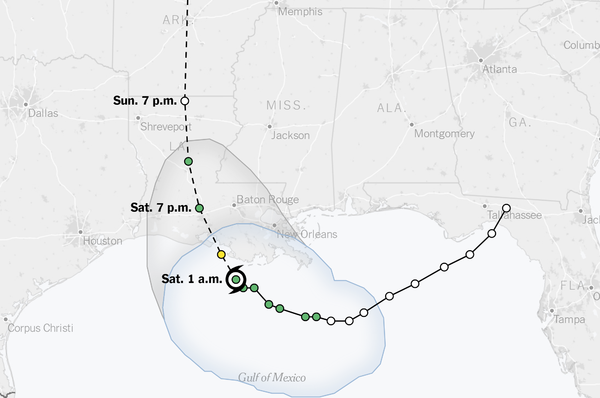 Expected rainfall and path for a storm that threatens Louisiana.

[Read more on why rainfall is the biggest threat.]

The mayor said he spent much of Thursday getting sandbags to residents and trying to keep them calm. On Friday morning, the storm was about 100 miles from shore and moving slowly toward the coast before its expected landfall on Saturday morning, when it is also predicted to become a hurricane. Homeowners said they know they have been lucky in recent years, as hurricanes like Katrina in 2005 and Gustav and Ike in 2008 passed Morgan City by without much damage.

Jo Ann Blanchard runs two restaurants, a salon and an event center that all sit directly across the street from the levees along the Atchafalaya River.

“When you go out my door, you’re looking right at the sea wall,” she said from inside Cafe JoJo’s.

Ms. Blanchard said she restocked before the summer so she could keep serving seafood and pasta during hurricane season. She plans to stay in the restaurant as the storm comes ashore.

“We just sit here and wait, and when it comes, it comes,” she said. “Sandbag it, hunker down and wait for the river to rise.”

Mr. Grizzaffi, who was on the City Council at the time, said residents woke up to downed power lines and toppled trees but no serious injuries. Cleaning up afterward cost the city nearly $3 million. Since then, at least five Gulf hurricanes have passed the city by.

Like New Orleans, Morgan City has pumping stations to remove water from the city. After the first five inches of rain have fallen, the system can handle about one inch an hour.

“If it comes in a band, our pumps play a catch-up game,” Mr. Grizzaffi said.

Tim Matte, executive director of the St. Mary levee district, said the federal levees along the Atchafalaya River, which has a flood warning in effect, are at least 20 feet high. He said the river is only expected to rise about nine feet, but a storm surge could push water to less protected areas of the city, where city-owned levees are only about 12 feet high.

“There will be street flooding,” said Mr. Matte, who has lived in Morgan City since first grade and served four terms as mayor. “There will be a limited ability to move about the city these next couple of days.”

“A lot of these businesses have second-story offices because of that reason,” he said.