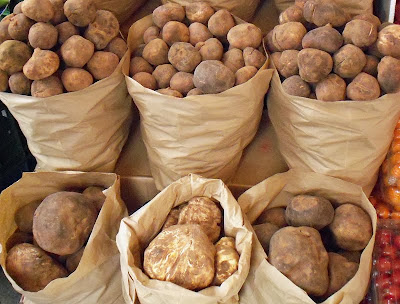 Desert truffle is a distant relative of the European truffle most of you are accustomed to. They grow in the dry environment of the Mediterranean, Arabian peninsula and North Africa. They mainly grow in the desert parts of these areas and are collected by local Bedouin. No dogs or pigs are used to find them and instead the Bedouin identify them through tiny cracks in the soil. Desert truffles grow close to the surface and they reach a fair size, up to 6 inches occasionally, pushing the surface to indicate the site of the prized fungus.

In Syria desert truffles are called Kemeh a variation of the Classic Arabic name, Kama'a. They are collected by the native Bedouins and sold in the local markets or exported to Gulf countries especially Saudi Arabia. Come spring time it is common site to see Bedouin women selling Kemeh in the streets and roundabouts of Damascus. Kemeh is highly prized by Syrians and they sell for anything between seven and fifteen UK pounds a kilogram. The price could go much higher in poor seasons and I remember seeing them going for around £80 one year. Kemeh season is very short and coincides with the beginning of spring. They just started to come into the market at the end of my holiday in Syria two weeks ago. 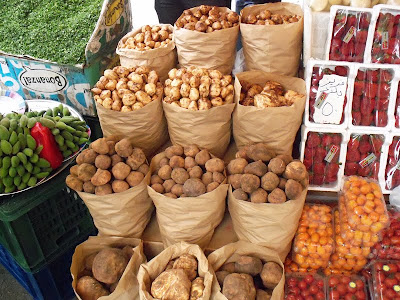 Local myth goes that Kemeh comes from thunder storms and the season is a good one if there were many storms over winter. Some people go even further to say Kemeh grows on the site were lightning hits the ground. Once a chemistry teacher gave us an explanation which I have no idea if it is true or not but here it goes, "when lightning passes through the air the energy causes Nitrogen and Oxygen atoms to react to form different types of nitrous oxides. These in turn dissolve and react with rain water to form nitrogen compounds including ammonia which are strong fertilizers and essential to protein formation". I tried to verify this theory from other sources but I couldn't.

Desert truffles have nothing to do with their European cousins in terms of taste, texture and aroma. Kemeh is more like dense mushrooms rather than the truffles you know. The most common way to cook them is Mufaraket Kemeh which my mum cooked us the last day of our holiday. Some people cook a rice dish with kemeh similar to Aubergine Maqluba and some adds kemeh to kabseh. My dad is a big fan of kemeh, and his favourite way to eat it is added to Lahem bi Ajeen. In Damascus, Lahem bi Ajeen is two layers of Pizza-like dough base (fatayer) with a middle layer of very thinly sliced steak baked in very hot oven.

If you fancy trying Desert Truffle here in London you can buy them preserved from DamasGate supermarket in Shepherd's Bush. Make sure you wash them thoroughly or even peel them again as kemeh is notorious for the amount of grit stuck inside its cracks. 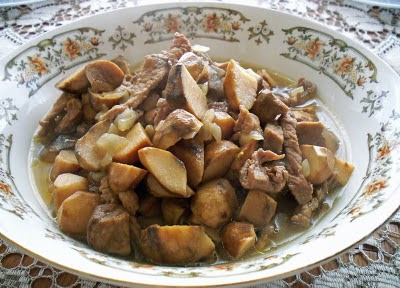 Desert truffle 800g400g of very thinly sliced lean lamb or beefOne large onionChicken stock 200mlsWaterSaltPepperGhee clarified butter 1tbspFinely chop the onion and fry in Ghee on medium heat till soft. Add the meat and fry till brown on all sides. Season well with salt and pepper.Cut the truffles into bite size pieces and add them to the pot with chicken stock and some extra hot water as required. Bring to the boil then simmer for about 30 minutes till the meat and truffles are fully cooked. The truffles should keep their dense firm texture.