In a paper Nature, Jiang et al.1 report the highest-magnification image ever obtained using a transmission electron microscope. The image reveals the atoms in a two-dimensional self-supporting sheet of a semiconductor, and has a resolution of 0.39 ångströms; for comparison, most atoms are about 2–4 Å in diameter. The technique might eventually allow 2D materials to be examined with unprecedented precision, providing insight into this burgeoning class of useful compounds. It might also lead to the development of a method that can image individual atoms in 3D objects. 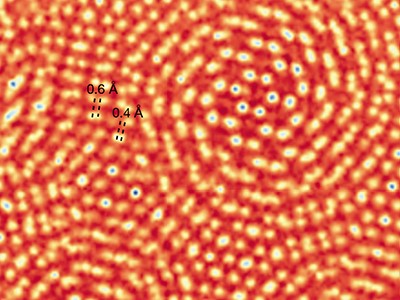 To generate their image, the authors used a method called ptychography (the ‘p’ is silent) in which radiation — in this case, electrons — is passed through a specimen to produce many 2D diffraction patterns. The basic principle of the technique was proposed almost 50 years ago by the physicist Walter Hoppe, who reasoned that there should be enough information in the diffraction data to work backwards to produce an image of the diffracting object2. However, it was many years before computer algorithms were developed that could do this reverse calculation easily and reliably3,4. The pictures produced by ptychographic methods are generated using a computer from a vast amount of indirect scattering data. An important advantage of this approach over conventional microscopy is that it can surpass the resolution limit imposed by lens imaging. In fact, it can work without any lenses at all5.

Over the past ten years, ptychography has been widely used for microscopy in the X-ray4, extreme ultraviolet6 and visible-light7,8 regions of the electromagnetic spectrum. It has also been used with some success with electrons, but Jiang and colleagues are the first to show that it can surpass the resolution obtained by the best electron lenses. For the technique to work, every electron must be counted almost perfectly, but the scattering patterns contain both extremely bright and extremely dark regions (they are said to have a high dynamic range), which makes it difficult to count every electron without any errors. To complicate matters further, the experiment must be done as quickly as possible to fulfil other experimental constraints, which means that about 1,000 diffraction patterns must be recorded every second.

Speed, accuracy and dynamic range are conflicting performance parameters in any electron detector — achieving them all is difficult. All previous electron detectors have compromised on one or more of these properties. The authors’ main achievement is to implement a detector that can handle such demanding specifications.

Remarkably, Jiang et al. gave themselves a huge handicap with regard to beating the resolution record. For any given microscope lens, the best resolution is achieved by using the shortest possible wavelength of the radiation or electron beams concerned. However, the authors used relatively low-energy electrons, which have twice the wavelength of those used in the highest-resolution lens-based microscopes9,10. Using low-energy electrons for microscopy is good because it greatly reduces the damage inflicted on the specimen by the electrons. But in this case, it also meant that the resolution of the lens used by Jiang and colleagues was reduced by a factor of two. To beat the resolution record, the authors had to process a particular subset of the ptychographic diffraction data (the high-angle data), thereby obtaining an image with a resolution 2.5 times better than would otherwise have been possible.

Achieving high resolution is not the whole story, however. Anyone with poor eyesight knows that they need as much light as possible if they want to read small print. This is because there is an intimate relationship between resolution, contrast and the amount of light illuminating the object. If the small print is light grey, not black, then the contrast is low, and even more light is needed to read it. The same principle is true for an electron microscope.

Jiang and colleagues used ptychography to work out how a particular property of the electron waves, known as the phase, changes as the waves pass through an object. This information can be used to produce images that have strong contrast — even for specimens that contain atoms of low atomic number, which are difficult to detect with conventional electron-microscopy methods that offer very high resolution. The authors therefore needed relatively few electrons to generate their images compared with other state-of-the-art techniques, such as annular dark-field electron microscopy (Fig. 1). So not only did they use low-energy electrons without compromising resolution, but they also used many fewer electrons than other techniques do, further reducing the damage done to the sample.

Perhaps the most striking feature of Jiang and co-workers’ image is not the atoms themselves but the enormous gaps between them. The average bond lengths in a material can be measured in a bulk sample by using all sorts of diffraction and spectroscopic methods, but the authors’ image provides an extremely precise measurement of the lengths of the bonds between individual pairs of atoms, which are sensitive to the atoms’ local bonding environment. But are ultrahigh-resolution images of gaps between atoms useful for anything else?

I think the answer lies in the big success story of X-ray ptychography: tomography4, a technique in which lots of 2D images of a transparent object are acquired as it is rotated, so that a 3D image can be built up. Phase information is an ideal imaging signal for this technique. But when images are taken through a solid object, the resolution needs to be as high as possible to distinguish features lying on the top surface from those at the bottom, many of which will seem (when seen in projection) to be laterally close to one another.

Jiang et al. tested the resolution of their electron microscope by putting two layers of atoms on top of one another and measuring the minimum apparent lateral distance between atoms in different layers, some of which were almost overlapping. In my view, this test demonstrates that their instrument could potentially be used for tomography. In theory, such imaging of multiple layers is not limited to crystalline 2D materials and could be used for any complicated, non-crystalline structure. Unfortunately, for thicker objects, the electron waves would scatter so strongly that they would spread out and re-interfere with each other in complicated ways, which would make it even harder — although in theory not impossible — to work out the structure.

Perhaps the take-home message of this work is not so much the record resolution, or its applications to 2D materials, but the fact that it will provide a way of precisely imaging the 3D bonding of every individual atom in a solid volume of matter, while using a minimal flux of damaging electrons. Indeed, the authors allude to this enticing possibility in their conclusions, suggesting that the next step is to use their remarkable detector for tomography. The aim would then be to solve the exact 3D atomic structures of solids that have no long-range order, such as nanocrystalline materials, glasses and amorphous metals, for which we must currently infer structures from averaged bulk measurements.

The article discusses work by a group at Cornell University that uses a computational method of imaging called 'ptychography'. There are many competing ptychographical inverse computation strategies, many of which have been patented by various groups around the world. Some of these methods (but not all of the ones used by the Cornell group) are subject to granted patents originally filed by the author:

PCT/GB2005/001464: 'High Resolution Imaging' by Rodenburg and Faulkner, European grant EP1740975B1, US Grant US7792246B2, and in various other territories: Original basis of the 'ePIE' algorithm used by the Cornell team for some of their reconstructions.

PCT/GB2008/000620: 'Three dimensional Imaging' by Rodenburg, European grant EP2152164B1, US grant US9116120B2, and in various other territories. Method not mentioned by the Cornell team or the author, but could be construed to encumber certain methods of ptychographical 3D imaging.

PCT/GB2011/051786: 'Three dimensional Imaging' by Rodenburg, Maiden and Humphry, European grant EP20110763975, US grant US9401042B2, and in other territories. Extension to removal of multiple scattering postulated by the Cornell team, but not mentioned by the author.

The above patents are owned by a company called Phase Focus Ltd, which was originally spun out of the University of Sheffield (the author's employer), with the help of the author.

The author retains a 2.86% shareholding in Phase Focus, but he is no longer involved with it in any other capacity.

Phase Focus now has an extensive patent portfolio, filed by its own employees, in addition to those above. They publish a list of awarded patents at: