Austerity Has Ravaged U.K. Communities. It Has Also Spurred Reinvention.

Leaders in Preston, England, replaced an aborted shopping mall construction project with a retro-chic market that has become a magnet for new businesses.CreditCreditFinbarr O'Reilly for The New York Times

PRESTON, England — In communities across Britain, funding from London was shrinking to nothing — the central equation of national austerity. But here in the fading industrial belt of northwestern England, the city of Preston took the crisis of budget-cutting as impetus for a basic refashioning.

In what has come to be known as the Preston model, the local government and other institutions began directing government spending toward local businesses. The city raised salaries for municipal employees, ensuring that they earned a living wage.

Local leaders replaced an aborted shopping mall construction project with a retro-chic market that has become a magnet for new businesses. They have aided cooperative businesses, including a farm-to-table-cafe that aims to boost the market for local produce while training people for jobs in the hospitality industry.

In short, Preston has exploited austerity as a catalyst for self-sufficiency.

Preston is not the only local council to adapt to austerity through radical experiments in governance. Other communities have doubled down on capitalism, venturing into real estate speculation in pursuit of revenues — a story not guaranteed to end in joy.

“It doesn’t look very wise at the scale that some councils have done it,” says Tony Travers, an expert on local government at the London School of Economics. “I am slightly amazed that the government has been content to sit and watch this.”

The architects of austerity, the Conservative-led coalition government that took power in 2010, championed it as the unavoidable reckoning with debts left by a global financial crisis. They described their budget-cutting as courageous and even transformative: Decreased public largess would force innovation in government, while spurring entrepreneurialism in place of an unhealthy reliance on the public sphere.

Spending on local services in England has plunged by more than one-fifth on average over the past decade, the Institute for Fiscal Studies calculated in a recent study, while especially troubled areas like the north of England have seen much deeper cuts.

Given statutory imperatives to maintain programs like care for older people and children, local councils have made sharper cuts where they have discretion. Spending has dropped by more than 60 percent on youth centers, by more than half on housing programs and by more than 40 percent on highways, transportation and cultural programs.

Some councils are running perilously close to exhausting their reserves, and a few have veered toward bankruptcy. Evidence of change is palpable and pervasive: Older people wait for volunteer-driven buses that have replaced discontinued public routes; patients sit for hours in hospitals before they can see an overwhelmed doctor; school administrators struggle to furnish basic items like winter coats and tampons to students.

Most of Britain now finds itself at an uncomfortable crossroads: Either taxes go up, or local services will almost certainly continue to decline.

In Preston, a city of 140,000 people, leaders have sought a route around that unpalatable choice. They have refocused public spending on area businesses, aiming to keep more money in the community rather than sending it away to global banks and international retail giants.

This refashioning began with the demise of the previous approach to economic development, a failed effort more than a decade ago to reinvigorate the forlorn downtown with a new shopping center.

The end came in 2009, just as austerity was beginning to force cuts to mental health and youth services, and just as the city was overwhelmed with joblessness, homelessness and despair.

“It was horrific,” recalls Matthew Brown, the leader of the Preston City Council, and an unabashedly left-wing member of the Labour Party. “We were totally constrained in our capacity to help people.”

One night in March 2012, Mr. Brown went to a local pub to meet an expert from a research institution focused on reviving the fortunes of local communities. Their conversation yielded the blueprint for the Preston model.

The model operates not with force of law, but as a social pact. In return for a reliable stream of public money, local institutions pledge to consider more than the bottom line in building new facilities, hiring and paying workers, and contracting for services.

At first, some of Mr. Brown’s council peers resisted his ideas as idiosyncratic flights of fancy. But as austerity tore at the fabric of life, basic ideological assumptions came up for reconsideration.

“It’s about systemic change,” says Neil McInroy, chief executive officer of the research institution, the Center for Local Economic Strategies, and the man Mr. Brown met in the pub. “There was a general aura of people searching for austerity answers.”

When the Preston model began, participating local institutions were directing only 5 percent of their spending within Preston and 39 percent within Lancashire County, according to an analysis by the center. By 2017, those shares had swelled to 18 percent and 78 percent respectively.

“There’s a correlation between deprivation and crime,” says Clive Grunshaw, the Lancashire police and crime commissioner. “If you can invest in these communities, then clearly they will benefit.”

On a chilly afternoon in January, a representative from the Preston Council left town hall and walked across the street to a boarded-up coffee shop owned by the local government. There, he handed the keys to Kay Johnson, founder of a local cooperative called the Larder.

Ms. Johnson’s company is devoted to boosting reliance on locally grown produce. It runs a culinary school and a catering operation. It offers free cooking classes at public housing complexes, giving low-income people strategies to eat healthier while staying within their budgets.

The coffee shop represents the Larder’s next phase. It will outfit the space as a farm-to-table cafe, serving as a place for graduates of its culinary classes to gain work experience. The council is supporting the effort with a discounted lease.

If austerity was the catalyst for moving toward self-sufficiency, the renovated 19th-century market is physical proof of the transformation.

“It forced us to start to looking inward,” says John Bridge, a Preston-born architect who helped design the new market as a partner at a local firm, and has since begun his own practice. “Because of austerity, we have had to think differently.”

Here is an irony of austerity’s consequences. Championed as a spur to rugged individualism, it has prompted communities like Preston to intensify government’s role in economic life.

“There was a culture shift,” Mr. Brown said, occupying a stool in a pub as a man with a banjo crooned Bob Dylan’s countercultural anthem “Maggie’s Farm.” “We’re trying to find alternatives to the capitalist model.”

Yet, in other communities contending with shortfalls, austerity has reinforced support for capitalism. Local leaders have adopted the mien of real estate magnates, using borrowed money.

Over the past two years, councils in England have raised purchases of land and buildings from 2.8 billion pounds annually (about $3.5 billion) to £4 billion (about $5 billion), according to government data. At the same time, total borrowing by English councils has risen to £10 billion, around $10.3 billion, from £4.4 billion. 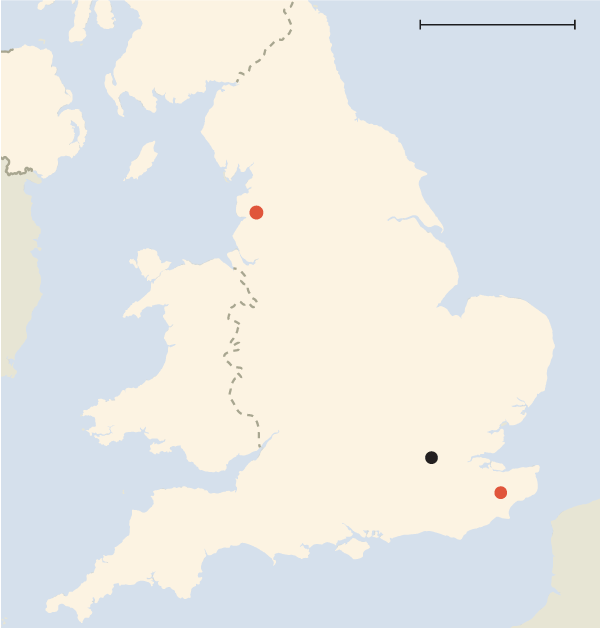 The body that sets standards for the management of government funds, the Chartered Institute of Public Finance and Accountancy, warned recently that tethering council finances to the swings of real estate investment portfolios was perhaps a less-than-fantastic idea.

“Council services are then linked directly to the success or otherwise of the property market, which can be volatile,” says Don Peebles, the institute’s head of policy. “The more services are funded through these returns on investment, the more that increases the risk.”

Tell that to Gerry Clarkson, who leads the Ashford borough council in the southeast of England. Austerity has lopped 40 percent from his council’s budget, yielding increased fees for trash and recycling, cuts to public sports centers and a surplus of lamentation.

“I said, ‘Stop moaning, and stop crying in your beer,’ ” Mr. Clarkson recalls. “‘We don’t need government funding. We are going to behave like a business.’ ”

A retired London fire chief and an unrepentant pounder of tables, Mr. Clarkson revels in telling stories that end with his dressing down some functionary whose doubts, arithmetic or ardor for regulation has impeded his grand visions.

He is intent on turning Ashford — home to 127,000 people, its downtown pockmarked with empty shops, tattoo parlors and liquor stores — into a thriving hub of commerce.

Thanks to high-speed rail links, the borough is but 38 minutes from London and two hours from Paris. “This is a sleeping giant right here,” he says.

Mr. Clarkson fancies himself a maestro of wealth-generating expansion. In 2013, his council bought a block of 30 apartments and some shops on the edges of town, paying a mere £1 million, or $1.3 million. The following year, the council purchased a 12-story office tower next to the train station, paying £7.8 million, or about $10 million, all of it borrowed.

Then the council bought a forsaken shopping center, the Park Mall, to inject life into the town center. Finally, it developed Elwick Place, a six-screen cinema plus restaurants, a hotel and a parking lot. That cost the council £42 million, or $53 million, 95 percent of it borrowed, though at an interest rate of about 1 percent.

All told, Ashford has sunk more than £50 million, around $65 million, into real estate ventures over the past six years. As Mr. Clarkson happily recounts, these investments have produced revenues expected to exceed £3 million, or about $4 million, this year. The office tower alone is yielding a 13 percent profit margin. The Park Mall is increasingly full of shoppers.

All this has cushioned the blow as Ashford’s grant from the central government has shrunk to £125,000 ($160,000) last year from £8 million ($10 million) in 2010, on its way to zero for 2019. Ashford has managed to largely maintain its public services along with some of the lowest property tax rates in the county.

But what happens if the economy turns down, or if property prices fall? To run a government as a business is to run it in a way that makes failure a possibility.

“You wouldn’t want to stop local governments from being entrepreneurial,” says Laurence Ferry, a public finance expert at Durham University. “At the same time, councils have to be careful. There has to be concern if they are stepping into areas outside their expertise.”

Governments may fail to properly assess the risks of industries like retail, now being swiftly refashioned by e-commerce.

Mr. Clarkson hears this and grins the grin of a man unwilling to be defeated by small-minded concerns. “You can’t get your nails done online,” he says. “You can’t get a cup of coffee online.”

Ashford will be fine, he insists, because its economy is built on housing — a commodity that, as he tells it, is somehow impervious to risk. “There’s nothing safer than houses,” he says.