Getting Started with Rust: Working with Files and Doing File I/O

How to develop command-line utilities in Rust.

This article demonstrates how to perform basic file and file I/O operations in Rust, and also introduces Rust's ownership concept and the Cargo tool. If you are seeing Rust code for the first time, this article should provide a pretty good idea of how Rust deals with files and file I/O, and if you've used Rust before, you still will appreciate the code examples in this article.

It would be unfair to start talking about Rust without first discussing ownership. Ownership is the Rust way of the developer having control over the lifetime of a variable and the language in order to be safe. Ownership means that the passing of a variable also passes the ownership of the value to the new variable.

Another Rust feature related to ownership is borrowing. Borrowing is about taking control over a variable for a while and then returning that ownership of the variable back. Although borrowing allows you to have multiple references to a variable, only one reference can be mutable at any given time.

Instead of continuing to talk theoretically about ownership and borrowing, let's look at a code example called ownership.rs:

So, what's happening here? In the first part, you define an integer variable (integer) and create a mutable variable based on integer. Rust performs a full copy for primitive data types because they are cheaper, so in this case, the integer and _my_integer variables are independent from each other.

However, for other types, such as a vector, you aren't allowed to change a variable after you have assigned it to another variable. Additionally, you should use a reference for the _a_correct_vector variable of Part 2 in the above example, because Rust won't make a copy of a_vector.

The last part of the program is an example of borrowing. If you remove the curly braces, the code won't compile because you'll have two mutable variables (a_var and b_var) that point to the same memory location. The curly braces make b_var a local variable that references a_var, changes its value and returns the ownership back to a_var as soon as the end of the block is reached. As both a_var and b_var share the same memory address, any changes to b_var will affect a_var as well.

The remaining Rust code shown in this article is pretty simple; you won't need to know about ownership to understand it, but it's good to have an idea of how Rust works and thinks.

Cargo is the Rust package and compilation manager, and it's a useful tool for creating projects in Rust. In this section, I cover the basics of Cargo using a small example Rust project. The command for creating a Rust project named LJ with Cargo is cargo new LJ --bin.

The --bin command-line parameter tells Cargo that the outcome of the project will be an executable file, not a library. After that, you'll have a directory named LJ with the following contents:

Next, you'll typically want to edit one or both of the following files:

Figure 1 shows all the files and directories of that minimal Cargo project as well as the contents of Cargo.toml. 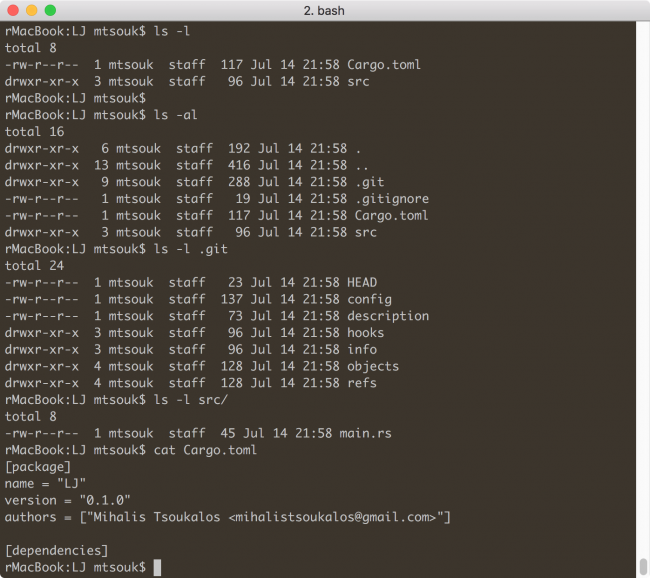 Note that the Cargo.toml configuration file is where you declare the dependencies of your project as well as other metadata that Cargo needs in order to compile your project. To build your Rust project, issue the following command:

You can find the debug version of the executable file in the following path:

Clean up a Cargo project by executing cargo clean.

The following code, which is saved as readWrite.rs, showcases the use of Rust readers and writers:

So, readWrite.rs first uses a writer to write a string to a file and then a reader to read the data from that file. Therefore, executing readWrite.rs creates the following output:

Now let's look at how to delete and rename files in Rust using the code of operations.rs:

The Rust way to rename and delete files is straightforward, as each task requires the execution of a single function. Additionally, you can see that /tmp/test.txt is created using the technique found in readWrite.rs. Compiling and executing operations.rs generates the following kind of output:

The code of operations.rs is far from complete, as there is no error-handling code in it. Please feel free to improve it!

This section explains how to access and process the command-line arguments of a Rust program. The Rust code of cla.rs is the following:

Let's look at what's happening in this example. First, it's using the env module of the std crate, because this is how to get the command-line arguments of your program, which will be kept in env::args(), which is an iterator over the arguments of the process. Then you iterate over those arguments using a for loop.

Say you want to add the command-line arguments of a program, the ones that are valid integers, in order to find their total. You can use the next for loop, which is included in the final version of cla.rs:

Here you iterate over the env::args() iterator, but this time with a different purpose, which is finding the command-line arguments that are valid integers and summing them up.

If you are used to programming languages like C, Python or Go, you most likely will find the aforementioned code over-complicated for such a simple task, but that's the way Rust works. Additionally, cla.rs contains Rust code related to error-handling.

Note that you should compile cla.rs and create an executable file before running it, which means that Rust can't easily be used as a scripting programming language. So in this case, compiling and executing cla.rs with some command-line arguments creates this kind of output:

Anyway, that's enough for now about the command-line arguments of a program. The next section describes using the three standard UNIX files.

This section shows how to use stdin, stdout and stderr in Rust. Every UNIX operating system has three files open all the time for its processes. Those three files are /dev/stdin, /dev/stdout and /dev/stderr, which you also can access using file descriptors 0, 1 and 2, respectively. UNIX programs write regular data to standard output and error messages to standard error while reading from standard input.

The following Rust code, which is saved as std.rs, reads data from standard input and writes to standard output and standard error:

Rust uses the eprint and eprintln macros for writing to standard error, which is a pretty handy approach. Alternatively, you can write your text to std::io::stderr(). Both techniques are illustrated in std.rs.

As you might expect, you can use the print and println macros for writing to standard output. Finally, you can read from standard input with the help of the io::stdin().read_line() function. Compiling and executing std.rs creates the following output:

If you're using the Bash shell on your Linux machine, you can discard standard output or standard error data by redirecting them to /dev/null:

The previous commands depend on the UNIX shell you are using and have nothing to do with Rust. Note that various other techniques exist for working with UNIX stdin, stdout and stderr in Rust.

Now let's look at how to read a plain-text file line by line, which is the most frequent way of processing plain-text files. At the end of the program, the total number of characters as well as the number of lines read will be printed on the screen—consider this as a simplified version of the wc(1) command-line utility.

The name of the Rust utility is lineByLine.rs, and its code is the following:

The lineByLine.rs utility uses buffered reading as suggested by the use of std::io::{BufReader,BufRead}. The input file is opened using BufReader::new() and File::open(), and it's read using a for loop that keeps going as long as there is something to read from the input file.

Additionally, notice that the output of the len() function and the output of the chars().count() function might not be the same when dealing with text files that contain Unicode characters, which is the main reason for including both of them in lineByLine.rs. For an ASCII file, their output should be the same. Keep in mind that if what you want is to allocate a buffer to store a string, the len() function is the correct choice.

Compiling and executing lineByLine.rs using a plain-text file as input will generate this kind of output:

Note that if you rename total_lines to totalLines, you'll most likely get the following warning message from the Rust compiler when trying to compile your code:

You can turn off that warning message, but following the Rust way of defining variable names should be considered a good practice. (In a future Rust article, I'll cover more about text processing in Rust, so stay tuned.)

Next let's look at how to copy a file in Rust. The copy.rs utility requires two command-line arguments, which are the filename of the source and the destination, respectively. The Rust code of copy.rs is the following:

All the dirty work is done by the fs::copy() function, which is versatile, as you do not have to deal with opening a file for reading or writing, but it gives you no control over the process, which is a little bit like cheating. Other ways exist to copy a file, such as using a buffer for reading and writing in small byte chunks. If you execute copy.rs, you'll see output like this:

You can use the handy diff(1) command-line utility for verifying that the copy of the file is identical to the original. (Using diff(1) is left as an exercise for the reader.)

This section describes how to find and print the UNIX file permissions of a file, which will be given as a command-line argument to the program using the permissions.rs Rust code:

All the work is done by the permissions() function that's applied to the return value of std::fs::metadata(). Notice the {:o} format code in the println() macro, which indicates that the output should be printed in the octal system. Once again, the Rust code looks ugly at first, but you'll definitely get used to it after a while.

Executing permissions.rs produces the output like the following—the last three digits of the output is the data you want, where the remaining values have to do with the file type and the sticky bits of a file or directory:

Note that permissions.rs works only on UNIX machines.

This article describes performing file input and output operations in Rust, as well as working with command-line arguments, UNIX permissions and using standard input, output and error. Due to space limitations, I couldn't present every technique for dealing with files and file I/O in Rust, but it should be clear that Rust is a great choice for creating system utilities of any kind, including tools that deal with files, directories and permissions, provided you have the time to learn its idiosyncrasies. At the end of the day though, developers should decide for themselves whether they should use Rust or another systems programming language for creating UNIX command-line tools.