Cake or death: AMP and the worrying power dynamics of the web

AMP continues to be a large part of the way people view web content on mobile devices. Following AMP Letter, what we’ve seen from Google is largely nice sentiments accompanied by business as usual, and the web ecosystem is suffering for it.

Recently, I was drawn back into the world of AMP when I was credited with the suggestion for promotable IFRAMEs, and therefore the genesis of the Portals spec that it evolved into. I wanted to firmly distance myself from portals, because I see them as part of the effort to normalise the use of the AMP Carousel, which is an anti-competitive land-grab for the web by an organisation that seems to have an insatiable appetite for consuming the web, probably ultimately to it’s own detriment.

To be honest, last time I looked, it seemed like it had been designed to enable the AMP carousel. The carousel is a monopolistic land grab for the web and I want no part of it.

I subsequently sat down with Kenji Baheux, because Twitter is not a great forum for debate, and this blog post will try and make the problems clearer. Let’s divide AMP and its related standards into three areas: Technical, User experience and Commercial. These are indivisible – so we can’t have a discussion about the standards without also understanding what they enable and the commercial incentives they create.

Technology standardisation is about long term vision, respecting the architectural foundations of the existing platform, and solving the ‘right problem’. In the past, AMP has been responsible for some mind-blowingly terrible suggestions in this regard, such as:

Right now though, we have some more well-rounded ideas on the table, and it’s harder to object to them on purely technical grounds. In the case of Portals, the idea is to create a kind of IFRAME that doesn’t inherit any style or environmental data from the parent page, and therefore can be ‘activated’ to become the new top-level browsing context without having to be re-rendered (ie. instantly). The basic premise is fine, but let’s dig into the detail of “portal state”:

This enables Google to continue to exist after the destination site (eg the New York Times) has been navigated to. Essentially it flips the parent-child relationship to be the other way around. The destination site has to opt into this (but see coercion below). This thinking is not how the web is designed to work and is acting against the ethos that made the web successful. When I proposed promotable IFRAMEs, I specifically saw the end of this kind of behaviour as one of the key advantages. Remove the idea of orphaned state, and the concept of ‘adoption’, and then portals are fine and have my full support.

In relation to Web packaging and signed exchanges, the idea here is to allow a page and all its sub-resources to be preloaded in a privacy-preserving way, before a user declares an intention to navigate there. Right now, that can only be done by Google proxying the requests, causing the www.google.com/amp/s prefix problem. With web packaging, a publisher can digitally embed their domain into a piece of content, making it possible to download that content from any URL and the browser would still show nytimes.com or whatever. This is also a great solution for saving webpages to disk, and some say for exchanging web content offline, eg via USB sticks (yawn).

I’ve described this to colleagues as a ‘skynet moment’ for the web. In Terminator, a sentient AI is released to try and stop a virus. It does so. And then decides to take over the world.

As soon as a publisher blesses a piece of content by packaging it (they have to opt in to this, but see coercion below), they totally lose control of its distribution. It would be possible to make a whitelist of domains that are allowed to distribute the content but that implies that the whitelist will just be Google and that looks like coercion (because it is). Instead, the main ‘safety catch’ that has been built into web packaging is that packages expire after 24 hours.

Now, I say that if content is sufficiently fast, it shouldn’t need preloading. We can get to fast with standards like Feature Policy (which I really like) and metrics like Speedindex. We don’t need to get to instant. Navigation transitions help here too, but seem to have stalled again. However, if you MUST have preloading, then you need packaging, so lets see how this could be improved:

I’m not that smart, so it’s surely possible to figure out other ways of making a preload possible without cutting off the content creator from the people consuming their content.

Most of the arguments I hear from Googlers about AMP are about user experience, and sometimes it feels like they’re suggesting it’s the only factor worth considering. Let’s break down a few points here:

The front page of a newspaper is a carefully curated thing, and historically logistical limitations would constrain the impact of an errant editor who had ambitions of malicious disinformation. Today, commercial constraints and the overt nature of ownership still to some extent keep traditional media in check. No such checks exist for purely digital, new media publishers, whose origins can be obscured. So I am justifiably horrified when, in the wake of a terrorist attack, the FT (for whom I used to work) will spend hours figuring out how to present fragmented information in the most appropriate way, while Google blithely displays pages from 4chan in Top Stories

This equates a responsible, expensively produced, extensively researched, professional newsgatherer with some guy who thinks the earth is flat for no reason other than that it ‘kinda feels right’. 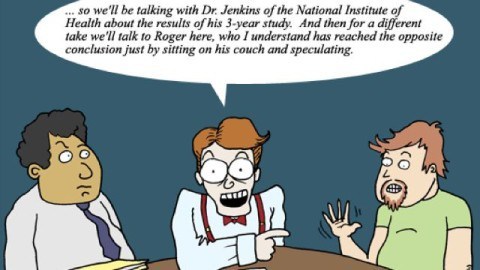 Recognising and respecting that one type of information is not the same as another, for some reason, seems hard to grasp. The BBC has been censured by the regulator in the UK several times for so-called false equivalence, on topics ranging from climate change to homeopathy. This isn’t just a bug you need to fix. It’s an institutional, cultural problem within Google.

AMP is a form of syndication, where content produced and normally distributed by one party is instead distributed by another party as part of a larger product. For two centuries, newspapers have been doing this. Since the dawn of the digital age, the Financial Times has been available via Bloomberg terminals. In the 90s, we got RSS, which kickstarted the idea that syndication might be free, but critically in this kind of relationship, the publisher gets to decide what they syndicate, in what form, and for how long. In the 2000s ‘richer’ syndication was still the preserve of commercial agreements (Bloomberg is paying FT a lot for all that content).

Enter AMP. By AMP’s way of thinking, it’s a better user experience for Google to syndicate your content, so they’ll just go ahead and do this without paying you for it (it’s opt in, but see coercion). It’s also better if they decide what is and is not allowed to be in your content and keep control of the user experience to the extent that they even control navigational gestures within your page.

The web is open and decentralised. We spend a lot of time valuing the first of these concepts, but almost none trying to defend the second. Google knows, perhaps better than anyone, how being in control of the user is the most monetisable position, and having the deepest pockets and the most powerful platform to do so, they have very successfully inserted themselves into my relationship with millions of other websites.

How would a publisher build a sustainable business model on this basis? It’s like a matchmaker that arranges a dinner date for you but comes with you on it, and after each course, removes your date and replaces them with another one. Who wins? Short term, you and the matchmaker. Medium term, just the matchmaker. Long term, nobody.

Finally, consider the relative priorities placed on protecting Google’s business vs respecting the business of others’. Since the inception of “first click free”, it’s been possible to cheat and get free content simply by setting a known, predictable string (the Referer header) into the request. Imagine if doing that allowed me to get free content from the Play store. The bug fix for that would land pretty bloody fast.

In AMP, the support for paywalls is based on a recommendation that the premium content be included in the source of the page regardless of the user’s authorisation state. Then portions can be hidden or displayed as required. This is equivalent to say, having all the physical access barriers at Google offices plugged into a power outlet that is outside the secured area, so I can walk into any Google office just by unplugging the security gate.

These policies demonstrate contempt for others’ right to freely operate their businesses.

AMP team members have been known to observe that they are ‘surprised and delighted’ by how popular AMP is. In the face of that I can’t improve on the words of the great Eddie Izzard:

– “Well, we’re out of cake! We only had three bits and we didn’t expect such a rush.”