There has been a sudden resurgence of interest in my “donut” code from 2006, and I’ve had a couple requests to explain this one. It’s been five years now, so it’s not exactly fresh in my memory, so I will reconstruct it from scratch, in great detail, and hopefully get approximately the same result.

This is the code:

…and the output, animated in Javascript:

At its core, it’s a framebuffer and a Z-buffer into which I render pixels. Since it’s just rendering relatively low-resolution ASCII art, I massively cheat. All it does is plot pixels along the surface of the torus at fixed-angle increments, and does it densely enough that the final result looks solid. The “pixels” it plots are ASCII characters corresponding to the illumination value of the surface at each point: .,-~:;=!*#$@ from dimmest to brightest. No raytracing required.

So how do we do that? Well, let’s start with the basic math behind 3D perspective rendering. The following diagram is a side view of a person sitting in front of a screen, viewing a 3D object behind it.

To render a 3D object onto a 2D screen, we project each point (x,y,z) in 3D-space onto a plane located z’ units away from the viewer, so that the corresponding 2D position is (x’,y’). Since we’re looking from the side, we can only see the y and z axes, but the math works the same for the x axis (just pretend this is a top view instead). This projection is really easy to obtain: notice that the origin, the y-axis, and point (x,y,z) form a right triangle, and a similar right triangle is formed with (x’,y’,z’). Thus the relative proportions are maintained:

When we’re plotting a bunch of points, we might end up plotting different points at the same (x’,y’) location but at different depths, so we maintain a z-buffer which stores the z coordinate of everything we draw. If we need to plot a location, we first check to see whether we’re plotting in front of what’s there already. It also helps to compute z-1 and use that when depth buffering because:

Now, how do we draw a donut, AKA torus? Well, a torus is a solid of revolution, so one way to do it is to draw a 2D circle around some point in 3D space, and then rotate it around the central axis of the torus. Here is a cross-section through the center of a torus: 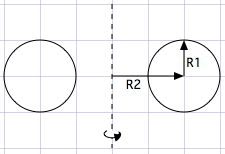 Now we take that circle and rotate it around the y-axis by another angle — let’s call it φ. To rotate an arbitrary 3D point around one of the cardinal axes, the standard technique is to multiply by a rotation matrix. So if we take the previous points and rotate about the y-axis we get:

But wait: we also want the whole donut to spin around on at least two more axes for the animation. They were called A and B in the original code: it was a rotation about the x-axis by A and a rotation about the z-axis by B. This is a bit hairier, so I’m not even going write the result yet, but it’s a bunch of matrix multiplies.

Churning through the above gets us an (x,y,z) point on the surface of our torus, rotated around two axes, centered at the origin. To actually get screen coordinates, we need to:

So we have another constant to pick, call it K2, for the distance of the donut from the viewer, and our projection now looks like:

K1 and K2 can be tweaked together to change the field of view and flatten or exaggerate the depth of the object.

Now, we could implement a 3x3 matrix multiplication routine in our code and implement the above in a straightforward way. But if our goal is to shrink the code as much as possible, then every 0 in the matrices above is an opportunity for simplification. So let’s multiply it out. Churning through a bunch of algebra (thanks Mathematica!), the full result is:

Well, that looks pretty hideous, but we we can precompute some common subexpressions (e.g. all the sines and cosines, and ) and reuse them in the code. In fact I came up with a completely different factoring in the original code but that’s left as an exercise for the reader. (The original code also swaps the sines and cosines of A, effectively rotating by 90 degrees, so I guess my initial derivation was a bit different but that’s OK.)

So our surface normal (Nx, Ny, Nz) is derived the same as above, except the point we start with is just (cos θ, sin θ, 0). Then we apply the same rotations:

So which lighting direction should we choose? How about we light up surfaces facing behind and above the viewer: . Technically this should be a normalized unit vector, and this vector has a magnitude of √2. That’s okay – we will compensate later. Therefore we compute the above (x,y,z), throw away the x and get our luminance L = y-z.

Again, not too pretty, but not terrible once we’ve precomputed all the sines and cosines.

So now all that’s left to do is to pick some values for R1, R2, K1, and K2. In the original donut code I chose R1=1 and R2=2, so it has the same geometry as my cross-section diagram above. K1 controls the scale, which depends on our pixel resolution and is in fact different for x and y in the ASCII animation. K2, the distance from the viewer to the donut, was chosen to be 5.

I’ve taken the above equations and written a quick and dirty canvas implementation here, just plotting the pixels and the lighting values from the equations above. The result is not exactly the same as the original as some of my rotations are in opposite directions or off by 90 degrees, but it is qualitatively doing the same thing.

It’s slightly mind-bending because you can see right through the torus, but the math does work! Convert that to an ASCII rendering with z-buffering, and you’ve got yourself a clever little program.

Now, we have all the pieces, but how do we write the code? Roughly like this (some pseudocode liberties have been taken with 2D arrays):

The Javascript source for both the ASCII and canvas rendering is right here.